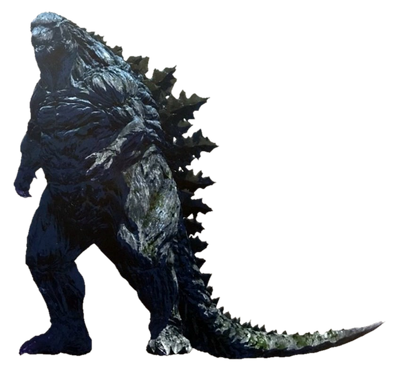 Godzilla Filius (ゴジラ・フィリウス) is a kaiju who appeared in the 2017 Godzilla film, GODZILLA: Planet of the Monsters.

Formed from cells that divided from Godzilla Earth during the 20,000 years he ruled over the Earth, Godzilla Filius grew to a height of 50 meters and was living in the former Tanzawa area when the Aratrum returned to Earth to reclaim it. Mistaking Filius for Godzilla himself, Haruo Sakaki and the Aratrum crew undertook a desperate plan to exploit Filius' only weakness and destroy him. While Haruo's plan was successful in destroying Filius, he and his allies were caught completely off guard when Godzilla Earth emerged to challenge them.

Durability: City Block level+, City level with Asymmetrically Permeable Shield (Should be comparable to young Godzilla Earth, whose forcefield tanked 150 nuclear warheads going off all at once, or 40 Megatons, without going down)

Range: Tens of meters by sheer size, thousands of meter with Atomic Breath

Intelligence: Animalistic. Godzilla Filius was depicted as hostile inherently, attacking humanity on sight, rather than waiting to be engaged.

Weaknesses: Its shield automatically collapses for a split second every few seconds, and destroying its dorsal fin will knock out its forcefield until it can regenerate

Note: We consider Godzilla Earth to be a separated incarnation of the character.