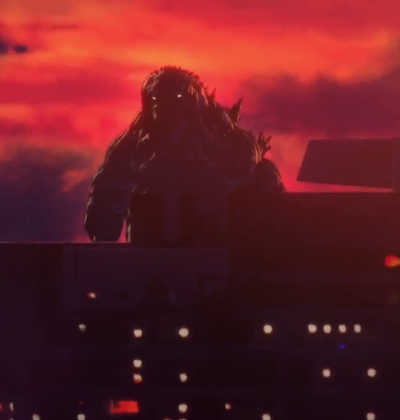 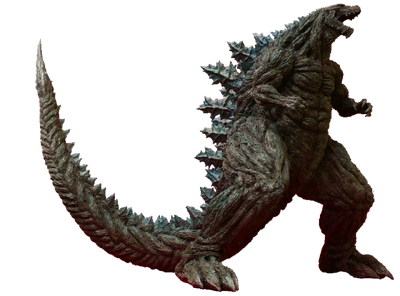 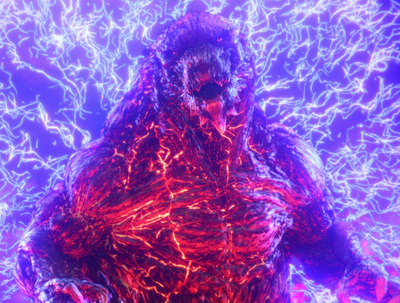 Godzilla Earth (ゴジラ・アース) is a kaiju who first appeared in the 2017 Godzilla film, GODZILLA: Planet of the Monsters.

Along with Godzilla Filius, Godzilla Earth is the first incarnation of Godzilla to appear in an animated film and is also the largest onscreen incarnation of the character to date. This incarnation of Godzilla first appeared in the year 2030, at which point mankind had already endured over a quarter of a century of repeated attacks from huge creatures called kaiju. Godzilla established himself as the most powerful kaiju, eliminating many of the others and resisting all of mankind's attempts to defeat him, even with the assistance of humanity's alien allies. By 2048, humanity realized it stood no chance against Godzilla and fled the planet to colonize a new home on the planet Tau-e in the Cetus constellation. When conditions on Tau-e were found to be uninhabitable, a group of humans returned to Earth only to find that 20,000 years had passed and that a bizarre new ecosystem had sprung up around Godzilla, now the dominant being on the planet.

All previous abilities but enhanced, with also Large Size (Type 2, 318 meters), Sound Manipulation/Vibration Manipulation (Able to project a sound wave that destroys things on a molecular level by resonant destruction by high power electromagnetic waves and also Negates durability, as well as vibrate its molecules rapidly to drastically increase the temperature around itself)

Attack Potency: Mountain level, possibly higher (Created a large crater when it destroyed Mechagodzilla's development complex and melted an unknown portion of the Himalayan mountain range and its continental plate with his particle beam after being trapped underground). Dwarf Star level with Red Spiral Particle Beam (Instantly obliterated Gorath, a 30km-wide asteroid with a mass comparable to Earth's moon, which would have destroyed the planet if a collision resulted. It took 5 years of Preparation) | At least Large Mountain level, possibly higher (Stated by Metphies that the attack Godzilla used to destroy Mechagodzilla's complex before would be nothing to it now, and that its power had increased proportionally to its increase in size, which should put it at around 10 times stronger). Dwarf Star level with Red Spiral Particle Beam (It will take 5 years of Preparation). Can ignore conventional durability with Sound Wave

Lifting Strength: Class M (Should be comparable to Godzilla Filius) | At least Class M (Destroyed a small mountain by standing up, Its mass alone warrants this as it weighs 100,000 tons)

Range: Thousands of meters with Atomic Breath | Hundreds of kilometers

Intelligence: Average. This Godzilla is extremely hostile and violent even by monster standards, while also being highly intelligent, being able to outsmart humans. Metphies stated that "Godzilla will never ever let humanity flee". Furthermore, it not only targets humanity but also targets other monsters. He protects the planet, demonstrated when he detected the approach of the Gorath asteroid and rested for several years to store enough power to destroy it. He also detected the construction of Mechagodzilla in 2046 and traveled to the development plant in Hamamatsu to destroy it before Mechagodzilla could pose a threat to him.

Note: We consider Godzilla Filius to be a separated incarnation of the character.