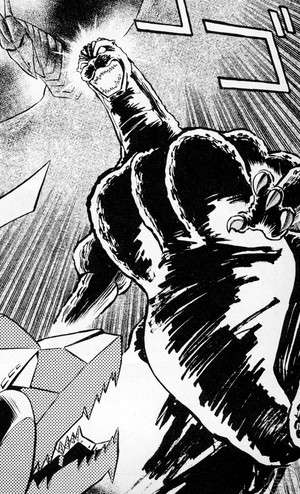 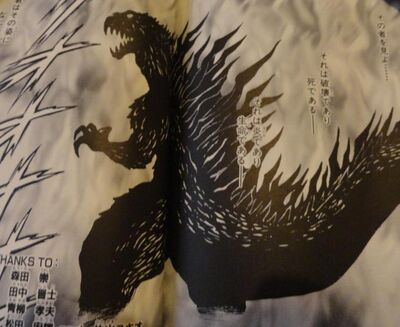 Shogakukan Godzilla is the product of different manga adaptations of Godzilla films made during the last century. In general, the adaptations were not fully faithful to the films on which they are based, new characters and situations were added to the story making it simpler but better argued.

Name: Godzilla, King of the Monsters

Superhuman Physical Characteristics, Radiation Manipulation, Regeneration (Low-Mid), Immortality (Types 1 and 3), Skilled in Hand to Hand Combat, Large Size (Type 1), Self-Sustenance (Types 1 and 2; Can survive the pressure of the bottom of the ocean and without food for long periods of time), Natural Weaponry (Teeth and Tail), Enhanced Senses, Skilled in stealth, Can negate regeneration from Mid and under with the Giga Blast, Energy Manipulation, Absorption, and Projection, Resistance to Black Holes and Electricity Manipulation

Attack Potency: At least Planet level (Took first on Biollante, then Mecha-King Ghidorah, took on Mothra and Battra at the same time and killed Battra, was stated by the Cosmos twins that Mothra and Battra hold the power to destroy a huge asteroid that would destroy the Earth), possibly Large Planet level with Rodan Boost (Easily destroyed Super Mechagodzilla who easily withstood his normal atomic breaths. Godzilla later also fought SpaceGodzilla, who had been Stated by the Cosmos twins to have destroyed planets in his journey to Earth. Godzilla pierced through SpaceGodzilla with a crystal) | At least Large Planet level (Burning Godzilla was at the peak of his power, and therefore stronger than his past self that fought SpaceGodzilla. Slatemated Destoroyah in a clash of beams) | Small City level (Godzilla destroyed Hyper Orga with a supercharged Giga Blast attack)

Intelligence: Average (He fully understands humans and knows complex keys and martial arts techniques. He uses all his advantages against the disadvantages of the enemy)