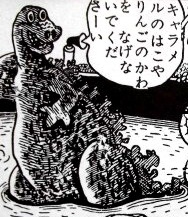 Attack Potency: At least Building level physically (Collapsed buildings by just walking into them, his KE should be at this level), higher via Vapor Breath (Can cause more damage with it)

Speed: At least Superhuman by virtue of sheer size, possibly higher while swimming

Durability: At least Building level (Survived blows from other monsters on his level)

Range: Tens of meters by sheer size, Hundreds of meters with its breath

Intelligence: Average. Understands humans, can talk like a human, usually he is training martial arts.

Retrieved from "https://vsbattles.fandom.com/wiki/Godzilla_(Rampage_Godzilla)?oldid=5969328"
Community content is available under CC-BY-SA unless otherwise noted.