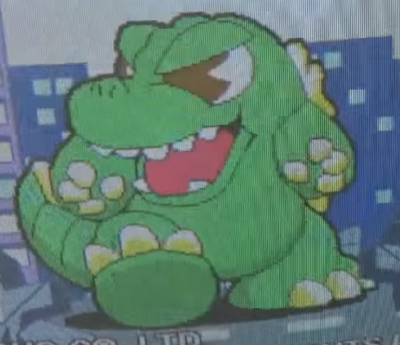 Godzilla After dispatching several waves of JSDF forces, Godzilla is stymied by the Super X until another monster arrives to destroy it and challenge him. Buttons mounted on the sides of the screen allow him to tackle, tail whip, and fire atomic breath at his enemies. As a finishing move against monsters, he uses an orange beam reminiscent of the Heisei Godzilla's red spiral heat ray. Once his enemy is defeated, Godzilla returns to the sea.

Attack Potency: At least City Block level physically (Collapsed buildings by just walking into them), higher via Atomic Heat Ray (Can cause more damage with it)

Speed: At least Superhuman by virtue of sheer size, possibly higher while swimming

Durability: At least City Block level (Survived blows from other monsters on his level)

Range: Tens of meters by sheer size, Hundreds of meters with its breath

Retrieved from "https://vsbattles.fandom.com/wiki/Godzilla_(Jumbo)?oldid=6005529"
Community content is available under CC-BY-SA unless otherwise noted.