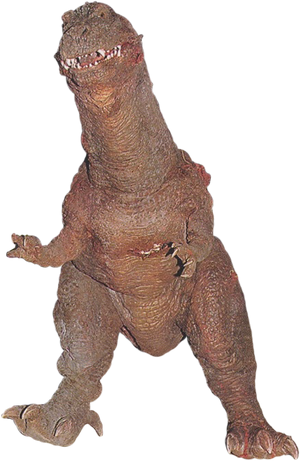 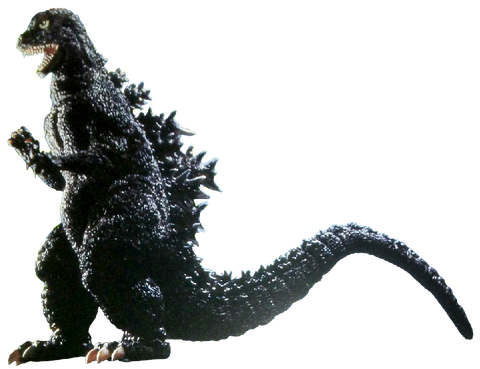 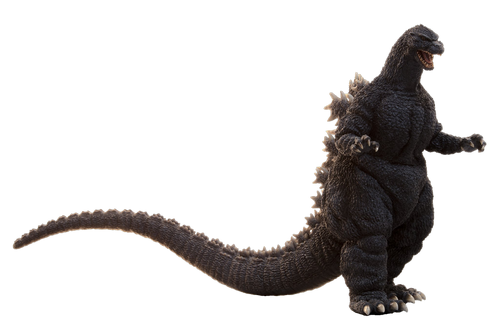 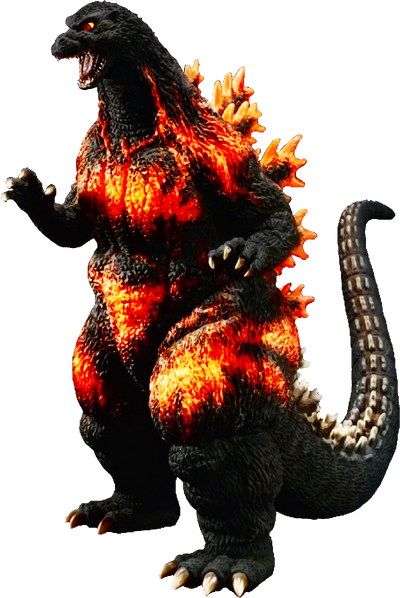 Heisei I: In the 1970s, a nuclear submarine crashed in the Bering Sea. A Godzillasaurus, barely hanging on to life in the cold ocean depths, was heavily mutated to a staggering height of 80 meters. This dinosaur had been relocated to this remote area by time travelers from the 23rd century, but little did they realize that their actions would actually fulfill the course of history and create the Godzilla they had sought to destroy...

Heisei II: Though the Futurians from the 23rd century had sought to destroy Godzilla through the means of time travel, they had failed in this attempt. The Godzillasaurus, which the time travelers had relocated to the Bering Sea, mutated to a towering 80 meters when exposed to a nuclear accident in the 1970s. In 1992, the monster was exposed to yet another nuclear accident, and the already incredible anomaly grew to an even more unthinkable 100 meters in height! As the revamped reptile began to march southward toward the mainland, the Japanese government breathed a sigh of relief.

Age: At least 65 million years (Godzillasaurus is a survivor of the Cretaceous period according to official books) | Higher in the rest of the series

Same as base, with Immortality (Type 3), Large Size (Type 2), Electricity Manipulation and Absorption, Skilled in Hand-to-Hand Combat, Energy Manipulation, Energy Absorption and Energy Projection, Breath Attack, Self-Sustenance (Types 1 and 2; Can survive in the vacuum of space, the pressure of the bottom of the ocean and without food for long periods of time), Stealth Mastery, Aura, Radiation Manipulation (Radiation Absorption and nuclear-infused physical attacks), Heat Manipulation (Godzilla's standard atomic breath in the Heisei series is 500,000 degrees Celsius), Regeneration (At least High-Low), Resistance to extreme heat (Able to resist heat in excess of 1500 degrees Celsius), Fire, Acid, Ultrasonic waves (He was unaffected by ultrasonic waves) and high gravity (Share the same gene as SpaceGodzilla who could survive the high gravity of a pseudo black hole so Godzilla should able to do survive a similar case)

Same as before, with limited Telepathy, Regeneration (Mid, Godzilla regenerated his exploded brain in seconds post Rodan Boost in battle), Transformation (Into Burning Godzilla), Resistance to Matter Manipulation (Resisted micro-oxygen, which breaks down most matter on a molecular level) and Mind Manipulation

Same as before, with Self-Destruction (Cannot be controlled by will ) and Resurrection

Attack Potency: Small Building level (Can fight against dinosaurs who can harm him) | Continent level (Can fight and defeat foes that damaged him, such as Biollante and Super X2. Pushed the Super X2 durability to its absolute limit) | Planet level (According official guides, Godzilla is strong enough that he is capable to destroy Earth during Godzilla V Mothra 1993 film events. Took on Mothra and Battra at the same time and killed Battra), higher with Uranium Atomic Heat Ray (Easily destroyed Super Mechagodzilla, who easily withstood his normal atomic breaths) and Burn Spiral Heat Ray (This attack was used to finish off SpaceGodzilla, who shrugged off Godzilla’s atomic breaths) | At least Planet level (Burning Godzilla was at the peak of his power, and therefore stronger than his past self that fought SpaceGodzilla. His power also increased continuously as he approached Meltdown), higher with Infinite Heat Ray (This beam is said to increase infinitely in power each time Burning Godzilla uses it). Large Planet level with Meltdown

Durability: Small Building level (Completely undamaged by small arms and rocket launchers, Can survive WW2 battleship cannons but not without extremely grievous injuries, though he survived nevertheless) | Continent level (Emerged from a volcanic eruption completely unharmed, and suffered no serious injuries after multiple blasts from the Super X2, to the point its Fire Mirror was pushed beyond its limit) | Planet level (Even the combined efforts of Battra and Mothra could only render Godzilla unconscious temporarily. Survived multiple attacks from SpaceGodzilla) | At least Planet level (Should be more powerful than before due to his continuous growth in power)

Intelligence: Average: acts mostly on instinct, yet he has bouts of cognitive thought as he remembered Yasuaki Shindo leaving him to die as a Godzillasaurus after being injured, and as Godzilla, killed Shindo out of vengeance. During the final battle against SpaceGodzilla, Godzilla was the first to figure out that this foe was drawing energy from the Fukuoka Tower and, with the help of Land Moguera, Godzilla demolishes the Tower and saps SpaceGodzilla's energy. Given Godzilla's evasion of the J.S.D.F. during a bout with Biollante, he seemed to display implications of precognition. He also cried when he failed to revive his son Godzilla Jr after he was killed by Destoroyah.

Weaknesses: None notable | Susceptible to infection from the Anti-Nuclear Energy Bacteria | Draining his nuclear reactor heart of nuclear energy fast enough will incapacitate him. Destroying the "second brain" in his lower torso paralyzes him, leaving him helpless. Absorbing too much radiation at once will turn him into his Burning form | Absorbing radiation accelerates his meltdown/burning, having his temperature brought down enough can potentially stop the meltdown, though the immense radiation will still be present.

Note: This profile only covers the Godzilla incarnations from the Heisei era continuity, from 1984 (Beginning with The Return of Godzilla) to 1995 (Ending with Godzilla vs. Destoroyah). Due to the time travel in Godzilla vs King Ghidorah, the Futurians caused a circular paradox (the Godzillasaurus was not the original Godzilla, and heisei.htm by putting him at the Bering Sea they caused The Return of Godzilla to happen)

Retrieved from "https://vsbattles.fandom.com/wiki/Godzilla_(Heisei)?oldid=7025936"
Community content is available under CC-BY-SA unless otherwise noted.