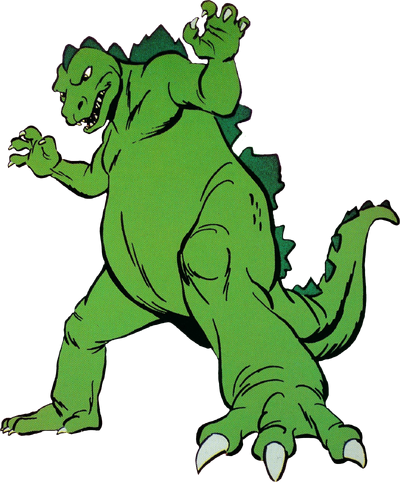 The series followed the adventures of a team of scientists on the research vessel called the Calico which was headed by Captain Carl Majors. The rest of the crew included Dr. Quinn Darian, who is a female scientist, Brock Borden, who is her African-American assistant and Carl's first mate, and her teenage nephew Pete Darian. Also along for the ride was Godzooky, the nephew of Godzilla and Pete's best friend who had a light-hearted role in the show. He could fly using his small wings under his arms, though his Uncle Godzilla was unable to fly. Whenever he tried to breathe fire, he would cough up smoke and he never seemed to have the ability to shoot laser beams from his eyes.

The group would often call upon Godzilla by using a special communicator known as the "Godzilla Signal" when they were in peril, such as attacks by other giant monsters. If the communicator was not present or lost, Godzooky would use a special "howl" to summon him. Godzilla's size in the animated series shifted radically, sometimes within a single episode or even one scene. (For instance, Godzilla's claw will wrap around a large ship, and only minutes later the team of scientists would fit rather neatly on Godzilla's palm.) Also, Godzilla's trademark atomic breath was altered so he breathed simple fire. He could also shoot laser beams from his eyes much like Superman's heat vision.

Resistance to the following Mind Control, Extreme heat (Has survived being submerged in magma), Poison (Overcame a giant black widow's poison), Electricity (Withstood electric attacks without damage), High Gravity levels (Survived high levels of gravity with no damage), Acid (Godzilla can touch a monster made of nuclear acid), Ice (Can survive pretty cold temperatures), Petrification (Resisted The Siren's powers , which can turn humans and kaiju to stone in seconds), Magic (Godzilla has resistance to Magic-based attacks)

Attack Potency: Large Planet level (Overpowered a spaceship that had a magnetic field strong enough to pull a moon-sized asteroid)

Speed: Superhuman travel speed with Transonic reactions (Reacted to fighter jets), higher via swimming (Can cross the globe in a few minutes)

Durability: Large Planet level (Has taken beatings from monsters stronger than him)

Stamina: High; can keep up with/match other Kaiju, swam from one side of the earth to the other in less than a second to grab an iceberg.

Range: Extended melee range due to size, Hundreds of meters with ranged attacks.

Intelligence: Above average (He understands human language; has a basic understanding of chemistry; doesn't necessarily kill his opponents himself but can if he must. Godzilla is very conscious of human life and will take steps to avoid harming nearby civilians and help them escape during his battles with enemy monsters. He often trains Godzooky in combat)