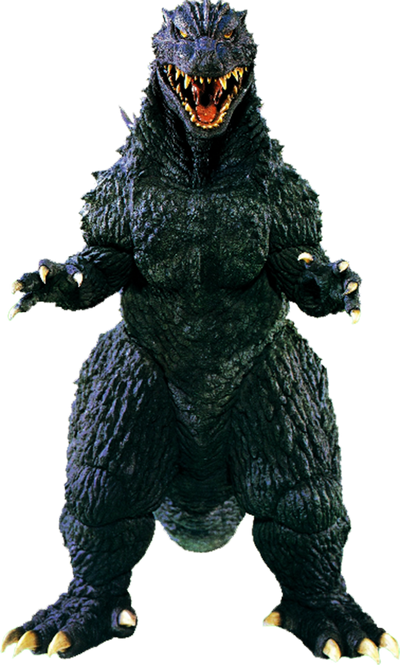 The Millennium Godzilla (ミレニアムゴジラ) is a kaiju that appeared in the 1999 Godzilla film, Godzilla 2000: Millennium.

It is the first incarnation of Godzilla to appear in the Millennium series of films and fifth onscreen incarnation of the character overall. This Godzilla first appeared sometime after the original Godzilla's demise in 1954, and continually menaced Japan over the years. During a confrontation with the JSDF in Tokai, Godzilla was attacked by a gigantic flying rock, which blasted him into the ocean with a powerful laser beam fired from a hole on its side. Yuji Shinoda, aided by his former colleague Shiro Miyasaka, analyzed some of Godzilla's discarded flesh, and discovered that his cells contained a substance they called Organizer G-1, which allowed his tissue to heal entirely within a matter of hours. They believed this discovery could revolutionize modern medicine and reveal the secret to immortality. Shinoda and Miyasaka also learned that the flying rock from earlier was actually an alien spaceship, whose occupants planned to harness the power of Godzilla's Organizer G-1 to adapt to Earth's atmosphere and establish a thousand-year empire. Godzilla returned for a rematch with the UFO in Shinjuku, where he was subdued and his Organizer G-1 was forcibly extracted. The aliens exited the UFO in a combined form, but the Organizer G-1 quickly overwhelmed them, mutating them into the monster known as Orga. Godzilla fought Orga, with his enemy's healing speed exceeding his own and rendering Orga nearly impossible to kill. Godzilla eventually allowed himself to be swallowed headfirst by Orga, who was attempting to engulf and fully assimilate him, only to unleash a powerful atomic shockwave that beheaded and killed Orga. With the alien invasion thwarted, Godzilla turned his rage on the rest of Tokyo, setting the city ablaze with his atomic breath.

Name: Godzilla, King of the Monsters

Attack Potency: Small Country level (Destroyed the Millennium UFO with an atomic breath, his Atomic Breath and Thermonuclear Pulse are this powerful)

Speed: Superhuman, Supersonic+ Attack Speed, Combat Speed, and Reactions (His Atomic Breath can move at Mach 4, Faster than Orga who can react to his attacks)

Intelligence: Below Average. Godzilla displayed a fair degree of intelligence during his battle with Orga, which allowed him to overcome his foe. When Orga instantly healed from all damage Godzilla had inflicted on him and attempted to swallow Godzilla whole, Godzilla let him do so, allowing Godzilla to destroy Orga from within by using a shockwave of atomic energy.

​Caused huge amounts of damage to Multiple Cities and Settlements