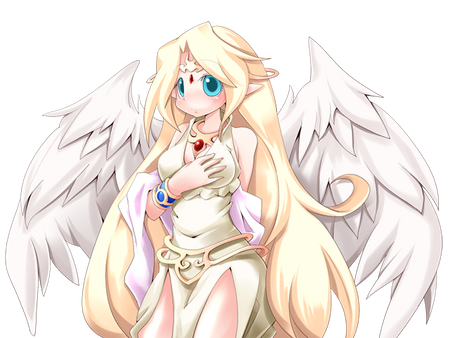 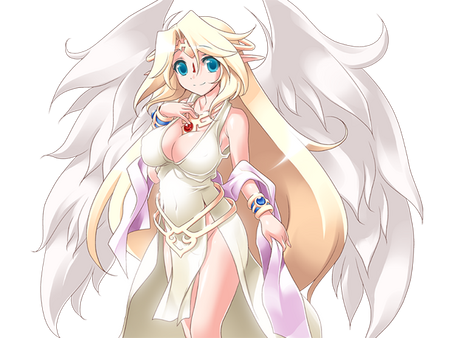 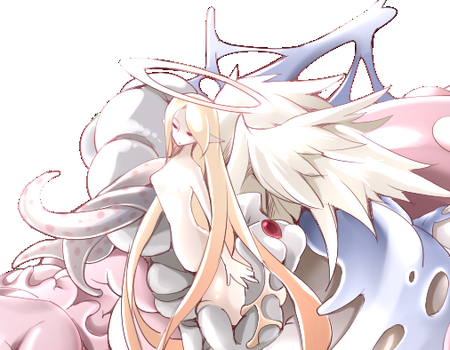 Goddess Ilias is the self-proclaimed Goddess that Created the World. She is the central figure of the main religion of the world, which most humans adhere to. As one of her main teachings is focused on preventing humans and monsters from interacting, her faith has caused the relations between humans and monsters to worsen over the years.

Despite what she claims, Ilias did not actually create the world. She was born long after the universe's creation, as the embodiment of holy energy. She was the only being in the world at that time, apart from Alice I, who she could not interact with. In her loneliness, she created many beings out of herself: Angels, with the first ones being Micaela, Lucifina and Seraph Eden, the three Seraphim. Dissatisfied with her creations, she went on to try and "raise" her own species on Earth: humans.

Despite this, she grew jealous of her fellow goddess' ability to freely manipulate the DNA of living beings and waged war on her. While Ilias had the disadvantage in this war, her reckless behavior threatened to destroy the universe, forcing her and Alice I to enter a kind of truce in order to prevent the destruction of the world. Alice I and the Six Great Ancestors would seal themselves away with one condition: should monsters be killed in masses, the amount of dark magic released would unseal Alice I, starting their conflict anew.

Thus, while Ilias had complete control of the world in theory, this condition made it so that Ilias could never wipe out the monsters she despised so much, forcing her to find ways around it. Thus came the plan for the Re-Creation of the world. This plan involved Black Alice, who would contain the dark magic released from the annihilation of monsterkind. This plan was set in motion after Luka's fight with Alice.

This plan was eventually seemingly thwarted by Black Alice and Promestein, who devoured the Goddess in order to become the Ultimate Being. However, this was all part of Ilias' plan. The true Re-Creation of the world involved Ilias taking the powers of the White Rabbit drug through Black Alice in order to become the true ultimate being and defeat Alice I by herself. After Black Alice was defeated by Luka she did achieve this goal, emerging from the monster lord's corpse as Dark Goddess Ilias.

Age: Billions of years old (Was born not long after the sun)

Superhuman Physical Characteristics, Self-Sustenance (Type 1, 2 and 3), Higher-Dimensional Existence (Holy magic composes half of Chaos, which is the existence that spawned all of space-time from itself and has been implied to be part of space-time’s structure), Non-Corporeal (Exists purely as holy magic), Possibly Nonexistent Physiology (Type 1. Holy Magic composes half of chaos, which represents the non-existent void that existed before space-time itself. Beings made out of holy magic are unable to be interacted with, even through Monster Lord’s Cruelty’s space-shattering and existence erasing effects), Regeneration (Mid-Godly. Can regenerate from being reduced to nothingness by Angel Halo), Non-Physical Interaction (Can interact with other angels and damage ghosts. Can permanently kill other angels), Abstract Existence (Type 1. As she is a goddess, she is the abstract concept of her element, namely Holy Magic), Conceptual Manipulation (Type 2. Completely destroyed Alice I in another timeline), Immortality (Type 1, 2 , 3, possibly 5 and 8. Reliant on holy magic), Magic, Flight, Time Travel (Can freely travel through space-time), Spatial Manipulation, Time Manipulation (Can stop time on a immeasurable scale for extended periods of time, preventing the destruction of a timeline. Caused time to reset each time Luka died. She can erode space-time around her, and her basic attacks can break through space-time barriers), Pocket Reality Manipulation (Created Heaven, which is separate from the main world), Creation, Breaking the Fourth Wall, Healing (Can heal herself or others), Resurrection (Can resurrect her allies), Light Manipulation, Holy Manipulation, Power Nullification (Can nullify attempts at reflecting or absorbing attacks with all of her holy attacks, as well as prevent magic from being used), Electricity Manipulation, Hair Manipulation (Can extend and weaponize her hair), Status Effect Inducement (Can inflict various status effects), Statistics Reduction (Can reduce various statistics of the enemy, as well as negate buffs they already have), Soul Manipulation (Can send an opponent's soul to heaven), Statistics Amplification (Can increase her own or her allies' statistics), Empathic Manipulation (Can make her allies become berserk), Air Manipulation, Water Manipulation, Summoning (Can summon reinforcements temporarily), Mind Manipulation (Can seduce the enemy), Death Manipulation, Hair Manipulation, Aura, Fire Manipulation, Ice Manipulation, Absorption (Can absorb health, mana and fighting spirit), Sleep Manipulation (Can put enemies to sleep), Empowerment (Becomes stronger in cities, towns and forests), Transformation, Reality Warping, Teleportation, Invisibility, Poison Manipulation, Acausality (Type 1)

All previous abilities, plus Immortality (Type 1, 3, 5 and 8; dependent on Chaos), Regeneration (High-Godly. Embodies the nothingness that existed before all of space-time and most concepts and will always come back from it), Acausality (Type 4), Nonexistent Physiology (Type 2), Abstract Existence (Type 1. As she is a goddess, she is the abstract concept of her element, namely Chaos), Void Manipulation (Can weaponize chaos, which is nothingness itself and erases anything it enters in contact with. It can even erase ghosts and angels. Passively causes space-time to erode around herself. Can completely erase Apoptosis like Adramelech), Chaos Manipulation, Conceptual Manipulation (Type 2. Can erase abstracts like the Spirits), Information Manipulation (Can cause the local space-time to get overloaded with information, redacting speech and then erasing the surroundings), Transmutation (Continued exposure to Chaos or Apoptosis can cause the Apoptosis phenomenon in someone, turning them into an Apoptosis), Quantum Manipulation (Created the Quantum element from herself), Darkness Manipulation, Explosion Manipulation (Can re-create the actual big bang on a smaller scale) Power Nullification (Can instantly seal skills with a gaze), Fear Manipulation (Can stun opponents in fear) Smoke Manipulation, (Can blind opponents with ink), Breath Attack, Corrosion Inducement (Can cause their enemy's body to get partially digested) Plant Manipulation, Gravity Manipulation (Can increases gravity to crush opponents) Resistance Negation (Can nullify resistances and immunities through Etermal attacks) Biological Manipulation (Can increases someone's metabolism to the point of destroying them from the inside), Petrification (Can petrify her enemies through certain attacks) Attack Reflection (Can reflect magical attacks back at the users), BFR (Can warp an opponent across space, killing them instantly) Size Manipulation (Can shrink enemies at will) Absorption (On a higher scale than before. Can completely absorb any beings, even angels and abstracts) Enhanced Senses (Can detect any disturbances within the wind, down to the smallest insect moving) Cosmic Awareness (Can react to the White Rabbit despite being only a fragment of the past, unable to react to time travellers like the White Rabbit) Large Size (Type 9)

Stamina: High (Does not need to sleep or eat)

Intelligence: Likely Supergenius (Knows about every single human being in all of history. Mere fractions of her are far smarter than the average human. She has stated herself to be omniscient several times, although this is heavily contradicted)

Standard Tactics: She will usually try to end her opponent as quickly as possible through her holy attacks. Against strong opponents that she cannot beat in a single attack, she will still mostly use her other strongest magical attack, even at the cost of her own stamina.