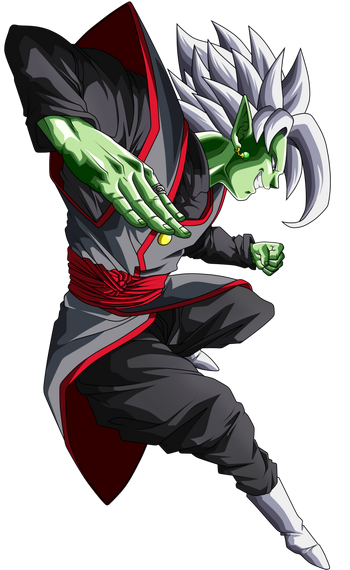 Fusion Zamasu (合体 ザマス, Gattai Zamasu) is a fusion born of the union between Goku Black (Present Zamasu in Goku's body) and Future Zamasu through the Potara earrings.

After nearly unfusing, he gained the ability to multiply, requiring Goku to summon Zeno to kill him once and for all.

Age: Up to an hour

Powers and Abilities: Superhuman Physical Characteristics, Acrobatics, Master Martial Artist, Flight, Spaceflight, Accelerated Development (Training; Physical Stats, Abilities), Self-Sustenance (Types 1 and 2), Magic, Enhanced Senses, Shockwaves Generation, Telepathy, Likely Statistics Amplification (Kaio-ken), Light Manipulation (Solar Flare), Afterimage Creation, Rage Power, Possibly Pressure Point Strikes, Power Mimicry (Can easily replicate other Ki-based techniques after seeing them once, is the fusion of Goku Black who claimed to possess all of Goku's abilities, as he stole his body), Immortality (Types 1, and 3; Was granted Immortality from Super Shenron), Regeneration (Mid-Godly; Beerus states that Hakai wouldn't kill him. Which has been stated to destroy one's body and soul completely so they cannot resurrect.), Reactive Power Level (Raised his power with damage), Energy Manipulation, Ki Manipulation (Can be used defensively and offensively, to strengthen his skin or to fire ki blasts, which can home in on targets. Including creating Energy Blades and Ki Constructs), Ki Sensing, Forcefield Creation (Goku Black can create barriers), Danmaku, Telekinesis, Teleportation (Goku Black can use Instant Transmission and Zamasu can teleport objects to himself), Dimensional Travel, BFR, Fire Manipulation, Healing (Zamasu can heal beings, which is confirmed to be the same type Kibito uses), Creation (Can materialise blocks of Katchin), Portal Creation (Can create portals to attack foes), Resistance to Extreme Cold, Cosmic Radiations, and Extrasensory Perception (Cannot be sensed by beings lesser than a God), Half of his body is Resistant to Paralysis and Adapted to Gravity via the Gravity Machine, Time Travel with Time Machine and Time Ring. Shapeshifting and Duplication as Infinite Zamasu (Can create entirely new copies of himself from even the smallest of pieces)

Durability: Multi-Galaxy level+ (Withstood attacks from Mastered Super Saiyan Blue Goku, who is equal to himself)

Stamina: Very high. Physically comparable to Goku, with his large endurance giving him the edge in combat.

Intelligence: Gifted. Zamasu, one of his components, is an expert combatant, even being described as the best fighter of all the Kais, with his fighting skill being increased upon fusing with Goku Black.

Weaknesses: Needs to locate a ki signature to teleport using Instant Transmission. Can physically overtax himself by restoring his body without recovering stamina.