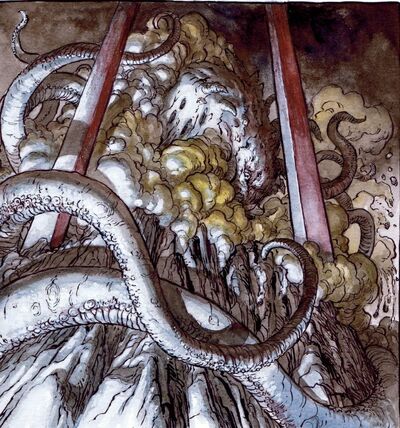 God Demon is a demonic kaiju created by IDW Publishing that appears in issue #5 of the comic book miniseries Godzilla in Hell. Serving as the final and possibly antagonist of the comic series.

God Demon is a massive creature that is mostly surrounded by clouds, leaving very little of its body visible. God Demon has a large rounded head with multiple eyes, tentacles surrounding its mouth, and sharp fangs. Its skin is a grayish color and has a decayed, uneven texture with spikes sprouting from it. God Demon has several long tentacles that extend down from its perch on the mountain.

Classification: Eldritch Supreme Being, Guardian of the Gate to the Living World

Attack Potency: At least Dwarf Star level (Stomped Base Godzilla without even trying)

Weaknesses: He relies too much on his power. Most of the time he is under a sleeping-like state, and this makes him unable to move when under attack.

Retrieved from "https://vsbattles.fandom.com/wiki/God_Demon?oldid=7031043"
Community content is available under CC-BY-SA unless otherwise noted.