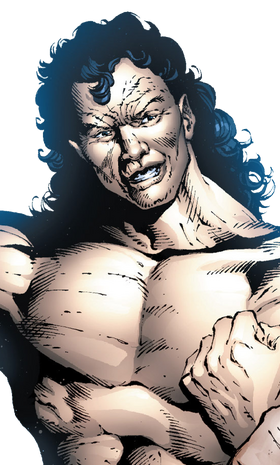 God is the twin brother of Satan and one of the many children of the Mother of Existence. He and Satan were both given the Earth to decorate to their wishes. As the result of a different point of view, God and Satan constantly bickered to a point where they declared war on one another. God became ruler of the Firmament, while Satan became master of the lowest depths of the Earth, namely Hell. In all his creations, God created something unique, creatures known as mankind, who would serve as his lapdogs. In death they are raised to join the armies of Heaven and Hell, as randomly selected puppets in a war that will reach its climax in Armageddon. However, Satan gave humanity the gift of free will, which only increased their bickering hatred towards each other.

The Mother, regarding her children as disappointments, stripped both God and Satan of their kingdoms and locked them away in a forgotten corner of the universe. However, despite their endless hatred, God and Satan still remain her children so she decided to give them a second chance. She brought back her children in the human bodies of Jake and Katie Fitzgerald in order to give them an appreciation for humanity and change their ways. This plan failed while the twins began to wreak further chaos on Earth. Knowing that Hell could break through the gates of Heaven at any moment, Zera went out to find God to return him to his throne. Once she found him, God regained his memories and returned to his rightful kingdom of Heaven, bolstering his armies for the final push towards Armageddon.

Speed: Immeasurable (Far superior to all angels, including the one that can transports Abidiel to heaven within 3 Dimensional seconds, which is a non linear time measurement)

Intelligence: Incredibly High. Has ruled heaven and warred with his brother for millions of years