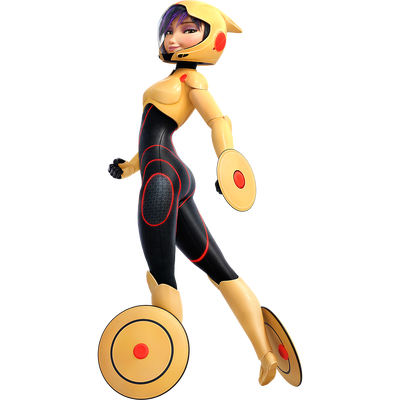 Go Go Tomago is a major character in Disney's 2014 animated feature film, Big Hero 6. A stoic adrenaline junkie, Go Go is an industrial design and mechanical engineering student at the San Fransokyo Institute of Technology, and a member of Big Hero 6.

Despite her stinginess, frank, and cynical ways Go Go is a strong-willed woman who would do anything to protect her friends. When in the face of danger or if her friends are in trouble, Go Go can become very serious and puts their lives over any obstacle that comes in her way.

However, what lies behind Go Go's rough shell is perhaps the largest amount of compassion she can dispose of necessary for the group. While she is defiant to authority, Go Go is committed to what she believes in and is determined to get the job done, which she passes on to her teammates when their hopes are down.

Age: Unknown, though she is a college student.

Lifting Strength: Athletic Human (Should be comparable to Honey Lemon)

Stamina: Above average (Can zip and leap around areas for extended periods of time without tiring)

Intelligence: Genius (Go Go is a brilliant industrial design and mechanical engineering student at one of the most prestigious universities in the world. She created her own bike and battle suit using magnetic levitation technology and has proven to be a capable combatant, able to act and think creatively and on-the-fly)