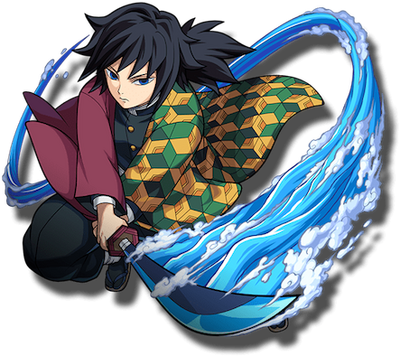 Tier: At least 8-C, at most 8-B with Demon Slayer Mark

Resistance to Fire Manipulation, Water Manipulation, Heat Manipulation (Demon Slayer Corps Garbs protect against fire, water and cold), Fear Manipulation, Paralysis Inducement (Withstood Rui’s aura. His aura was implied to be similar to Shinobu’s, which caused intense shuddering and lack of air. Also is resistant to Muzan's aura that made Akaza bleed and paralyzed him in fear), Air Manipulation, Confusion (Should take the same training as Tanjirou as he's also Sakonji's Urokodaki's student and Tanjirou trained in a mountain with little air for a year, and survived in a bog, despite the confusion and dizziness he must have experienced)

Attack Potency: At least Building level (Comparable to Base Sanemi in a sparring. Parried an attack and somewhat kept up with Akaza), at most City Block level+ with Demon Slayer Mark (Should be comparable to Marked Sanemi. Parried casual attacks from Muzan alongside Gyomei, Sanemi, and Obanai)

Speed: Massively Hypersonic+ (Superior to Zenitsu, who could do this), higher with Demon Slayer Mark

Stamina: Very high. Comparable to Tanjirou, who could fight for a week with barely enough human necessities. Likely took Urokodaki's training, which involved training in a mountain with low air, and constant traps. Fought Akaza despite being heavily injured for some time, only passing out from exhaustion after he was dead. Ran anyway from Tanjirou for three days.

Intelligence: Above average (Created his own Form within the Breath of Water Style)