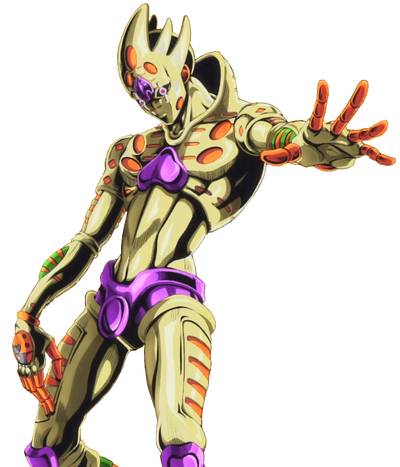 Giorno Giovanna is the illegitimate son of Dio Brando in Jonathan Joestar's body, and is the fifth "JoJo" in JoJo's Bizarre Adventure and the main protagonist of Part V: Vento Aureo. Born in Japan as Haruno Shiobana, he moves with his mother to Italy when she marries his new stepfather. Years later, in 2001, he is encountered by Koichi Hirose after he had been informed by Jotaro Kujo that he is DIO's son. His intentions reveal that he wants to become a "Gang-Star" and later become the Boss of Neopolitan Gang Passione. After fighting Bruno Bucciarati and passing Polpo's trial, he joins the Gang, becomes involved in a week-long mission of protecting Trish Una, and then aids Bruno in betraying the Gang and to assassinate the Boss of Passione.

Superhuman Reactions, Extrasensory Perception (Capable of seeing ghosts and souls among some other supernatural forces that are normally otherwise invisible), Aura, and Summoning (Of his Stand), Resistance to Disease Manipulation (Vaccinated himself with the blood of an animal immune to the Purple Haze virus, surviving its increasing infection). Gold Experience has Superhuman Physical Characteristics, Afterimage Creation (Its attacks often leave numerous afterimages), Non-Corporeality (Stands are the incorporeal manifestations of one's vital energy, and can only be harmed by other Stands), Non-Physical Interaction (Stands can interact with ghosts and other Stands), Invisibility (Stands can only be seen by other Stands and Stand Users), Selective Intangibility, Flight (Within its effective range), Aura, Life Manipulation (Gold Experience's ability works by injecting life into the things it touches), Transmutation (Able to turn inanimate objects into living beings), Age Manipulation (By injecting life into living things he can force them to grow until they exhaust their life spans), Biological Manipulation, Healing, Perception Manipulation (By injecting life into people he can accelerate their perception beyond their ability to move, this triggers simply by landing a regular blow on a living target), Extrasensory Perception (Much like its user), Life and Soul Sensing (Can manually sense nearby life energy)

Non-Physical Interaction (All of them, regular ants could move in King Crimson's hand), Attack Reflection (Any damage dealt to these creatures & plants are immediately reflected onto the attacker. This is not the case for the body parts & corpses infused with Gold Experience's energy, however), Adaptation (A brick in an area exposed to a virus was turned into a snake with immunity to said virus), Enhanced Senses (Many of them, Giorno has taken advantage of this by making them follow his foes), Poison Manipulation (Snakes, scorpions, etc.), Flight (Birds, mosquitoes, etc.), Underwater Breathing (Marine creatures such as fishes, which Giorno has used to navigate relatively short distances across the sea)

All previous abilities (Stands normally have "one ability", with their diverse powers being derived from it; As GER still shows having some of its previous powers, it's likely that it simply didn't lose its former Stand ability upon evolving), plus Causality Manipulation (Reverts actions moment by moment to where they started, with those actions otherwise creating a future that is guaranteed to occur; Said guaranteed future to occur is, in turn, a reality that "none who stand before" GER will ever arrive to, without Giorno himself being aware of it. Those who are struck by its power will have their deaths reverted and die an infinite number of times), Willpower Manipulation (The strength of an attacker will be reverted to zero), Energy Projection (Shot raw energy at Diavolo. The anime portrayal instead has GER wrapping a small rock with energy and launching that at Diavolo, which may or may not be what happened in the manga)

Attack Potency: Athlete level, Building level for Gold Experience (Was able to damage Black Sabbath, who incapacitated Echoes ACT3, who in turn was able to take hits from Killer Queen. Fought Sticky Fingers, who harmed King Crimson), able to ignore durability with most abilities | At least Building level+ physically with Gold Experience Requiem (Diavolo thought it to be a power-up and described Gold Experience to be able to attack with incredible power), Return to Zero ignores durability

Range: Two meters with Gold Experience, tens of meters via Life Sensing (Couldn't feel any life energy in a plane) | At least Low Multiversal for Gold Experience Requiem (Could capture the enemy in a cycle of infinite deaths across what seem to be parallel worlds)

Intelligence: Above Average (Giorno is an incredibly talented battle tactician, capable of outwitting Passione, which included many other Stand users, and a large amount of experience fighting other Stand users)

Note 2: It is unknown whether Giorno's stand lost its Requiem form or not when the Stand arrow fell off after the fight with Diavolo.

Note 3: There are canon statements that Gold Experience Requiem can reset will to zero. However, the exact meaning, capabilities, mechanics, and all other details are unknown due to lacking context and the ability having never been used canonically.

Kamijou Touma (To Aru Majutsu No Index) Touma's Profile (Speed was equalized. Both were 3 meters apart)

The Stalker (Clock of Atonement) The Stalker's Profile (Speed Equalized)