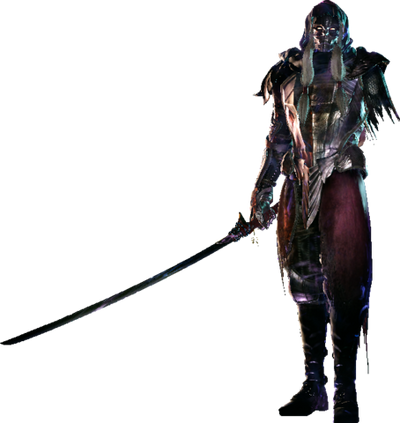 Gilgamesh, contrarily known as the Blademaster, is an antagonist and the final boss of Final Fantasy XV: Episode Gladiolus. Gilgamesh is the Shield of the Founder King from over 2,000 years ago and is the one who judges those as worthy or unworthy of defending the True King.

Gilgamesh lost his arm in a battle with the 15-year-old Cor Leonis but was able to steal Cor's katana in the same battle. Eventually, Gilgamesh finds himself fighting with and deeming Gladiolus worthy, finally gifting him with the blade he had stolen many years ago.

Powers and Abilities: Superhuman Physical Characteristics, Weapon Mastery (Is an expert with blades and has thousands of years of experience), Non-Physical Interaction, Soul Manipulation, Sealing, Afterimage Creation, Illusion Creation, Intangibility, Non-Corporeal, Healing, Regeneration (Low-Mid), Resurrection, Necromancy, Summoning, Creation, Power Mimicry (Can recreate weapons and swords of both himself and his opponent, copying the skills and abilities of said weapons along with them), Deconstruction, Teleportation (Can warp short distances), Air Manipulation (His mere presence causes the air to tense up), Statistics Amplification, Energy Projection, Immortality (Type 1, possibly Type 7), Resistance to Soul Manipulation and attacks which cannot harm the soul (Was only able to be harmed and defeated by Gladiolus after he achieved the power of souls, and casually tanks attacks from this ability), Mind Manipulation (He can bend the intentions of one's very soul to his will, controlling them and their actions entirely.), limited Forcefield Creation, possibly Self-Sustenance (Type 3), Durability Negation

Attack Potency: At least Multi-Continent level (Easily defeated Gladiolus and was incapable of being harmed by him, later fought on par with Gladiolus after he had completed the trials and proven that he would be a worthy Shield of the King, meant to defend and fight alongside Noctis)

Speed: Massively Hypersonic+ (Defeated and fought on par with Gladiolus, likely comparable to Noctis as a Shield of the King)

Range: Extended melee with his katana, higher with warping

Intelligence: Gilgamesh has been alive for over 2,000 years, and is heavily implied to have been fighting for a large majority of that time. It is also notable that Gilgamesh is a Shield of the King, which is a role and title that requires an incredible skill. Furthermore, Gilgamesh is able to perform many attacks and techniques with his blades and shows his prowess with being capable of defeating Cor Leonis after his arm had been cut off.

Weaknesses: Not many have been shown, but he has been defeated and knocked down by those with skills similar to his. He may not be the best fighter against flying opponents and was never shown

Gilgamesh as he appears in Final Fantasy Record Keeper

Gilgamesh in the Ardyn Prologue
Add a photo to this gallery