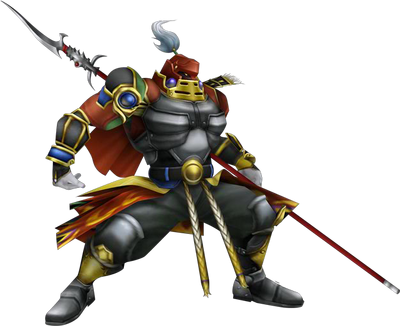 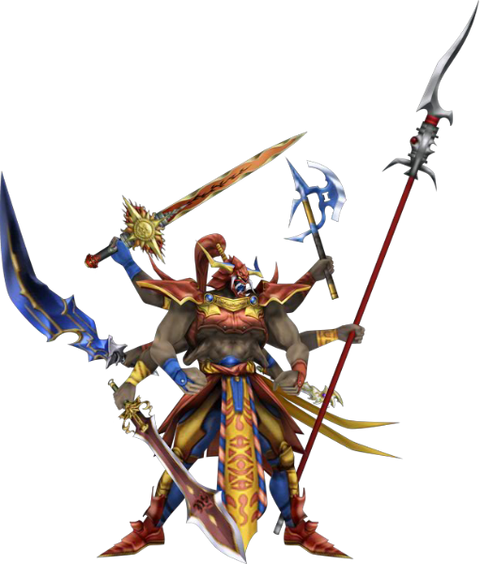 Gilgamesh is a recurring character throughout the entirety of the Final Fantasy series. First appearing as a vassal to the evil warlock, Exdeath, Gilgamesh is comically inept at his duties despite his skill as a warrior, being obsessed with obtaining the legendary Excalibur to add to his collection of weapons. Unbeknownst to him, many of these weapons are forgeries, and he's almost always seen with Excalipoor, a pale imitation of Excalibur that can only inflict shallow wounds, mistaking the false sword for the blade he seeks. After his second defeat at the hands of the Warrior of Light, Gilgamesh was sent tumbling through the Interdimensional Void, reappearing at many points throughout the franchises history as an ally to be summoned or an optional foe to test the party's might for great rewards.

Age: Unknown (Is called an "Ancient Man of Mystery" by the time he travels through Ivalice and is described as having "Immeasurable" age in Grymoire)

Powers and Abilities: Superhuman Physical Characteristics, Breaking the Fourth Wall (Is clearly aware of his nature as a video game character and complains about being stuck in digital limbo when the player has not bought his DLC), Master Swordsman, Skilled Hand-to-Hand Combatant, Magic, Elemental Manipulation (Of the Earth, Water, and Wind variety), Energy Projection, Statistics Reduction, Forcefield Creation, Petrification, Health Absorption, Healing, Durability Negation, Resistance Negation, Poison Manipulation, Sound Manipulation, Sleep Manipulation, Time Manipulation (In the variety of speeding himself up, slowing/stopping targets and temporarily aging targets), Status Effect Inducement, Shapeshifting (Most noticeable in IX and XI), Can rob his target of their ability to use physical or magical attacks, Can retaliate against enemy attacks, BFR (Can send opponents to another dimension via Banish), Can open portals to the Void to travel between various locales, Empathic Manipulation, Transmutation, Creation, Deconstruction, Mind Manipulation, Paralysis Inducement, Death Manipulation, Regeneration Negation, Resistance to Death Manipulation, Time Manipulation, and Poison (Via Null All), Void Manipulation (Can walk through the void without being erased from existence) | All of the same as before, has multiple arms (Varies, usually six or eight arms total), Can summon any weapon from his collection into his hands at will along with the heads of dragons, Can bind opponents with chains, Ice Manipulation, Electricity Manipulation, Self-Destruction

Attack Potency: Large Planet level (Is considered the strongest Esper in Final Fantasy VI, even outmatching Alexander and Crusader) | At least Large Planet level, possibly Multi-Solar System level (Able to defeat powerful foes like Necrophobe, A Demon of the Rift that was giving the party, including Squall, trouble with his full power)

Range: Extended melee range with weapons, much higher with magic

Intelligence: Although he is stubborn, fool-hardy, and headstrong to a fault, Gilgamesh is a doubtlessly skilled warrior, having appeared as a fearsome opponent in many games throughout the series and wielding multiple weapons at once with great proficiency. He has survived countless battles and honed his skills with the many melee weapons he's acquired over an immeasurable amount of time. Although he is sometimes easily fooled (as shown by the many forgeries he wields over the course of his adventures, including the infamously weak Excalipoor), he remains a capable combatant who can threaten even the mightiest warriors with these poorly made imitations, further serving as a testament to his skill in battle. 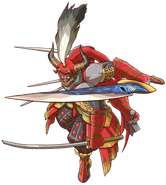 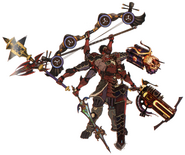 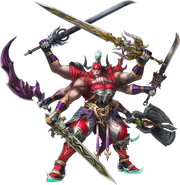 One of his many blades, Excalibur 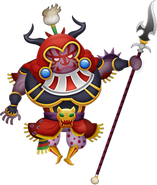 Gilgamesh's encounter in VIII
Add a photo to this gallery

Retrieved from "https://vsbattles.fandom.com/wiki/Gilgamesh_(Final_Fantasy)?oldid=7055464"
Community content is available under CC-BY-SA unless otherwise noted.