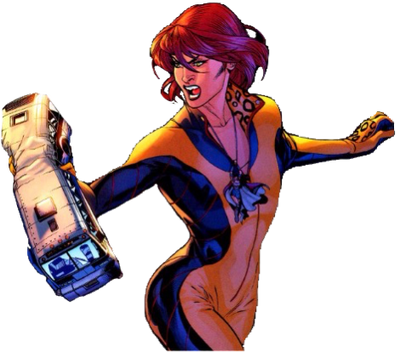 Doctor Doris Zuel was a brilliant scientist who found herself afflicted with a disease that would kill her. To try and save her life, she invented a machine that would allow her to transfer her body into the body of another person, after a failed attempt to transfer her body into Wonder Woman which left her trapped in the body of an ape, she found a circus strongwoman who was able to change her size at will who she stole the body of, and became the supervillain known as Giganta

Attack Potency: Up to Solar System level (Can trade blows with Wonder Woman)

Speed: Massively FTL+ combat speeds and reactions (Can react to Wonder Woman), with at least Transonic travel speed (Can keep up with cars going at max speed)

Durability: Up to Solar System level (Superior to Blue Beetle, Can tank hits from Black Adam and Wonder Woman)

Range: Up to Tens of Meters via sheer size.

Intelligence: Extraordinary Genius (Can create a mind swapping body, and is a professor and scientist by profession.)

Weaknesses: Formerly, her intelligence proportionally lowered as her size increased.

Retrieved from "https://vsbattles.fandom.com/wiki/Giganta_(Post-Crisis)?oldid=5188750"
Community content is available under CC-BY-SA unless otherwise noted.