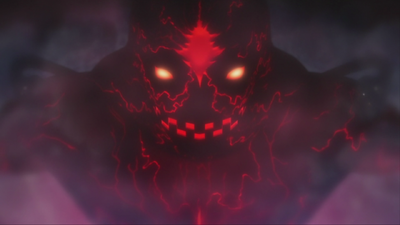 Gigant: Takemikazuchi was a form of satellite and the largest Nox Nyctores to have been created. According to BlazBlue: Continuum Shift, it was sealed away after the war due to fear of its use. Despite this, the satellite was still activated and had fired upon Kagutsuchi in BlazBlue: Calamity Trigger. From Rachel's words, it seems as though Takemikazuchi could only fire once every four years.

Superhuman Physical Characteristics, Self-Sustenance (type 1, 2 and 3 [lacks the need to for sustenance due to being a being made of seithr]), Large Size (Type 1 to 3), Acausality (Type 1; Is unaffected by the effects from a Phenomena Intervention, which can reset an entire timeline), Invulnerability (Is immune to conventional weaponry due to existing outside of Logic), Non-Physical Interaction, Energy Projection, Soul Manipulation, and Healing Negation (Nox Nyctores can damage the soul, negating any form of recovery, even when the reality is warped by multiversal entity), Immortality Negation (1, 2, 3, 4, 5, 6, 7, 8, and 9), and Regeneration Negation (Up to High-Godly [Scales from the Black Beast due to being stated to being similar in nature who's power was able to erase Terumi in the Azure Horizon, as well as kill Naoto and Arakune]), Sound Manipulation (Made everyone dizzy with a roar), Technology Manipulation (Seithr itself is capable of messing with the technology of the NOL and sector seven), Life Absorption (Sucked the life out of an entire city upon it's appearance), Automatic Reactions and Movements (Nox Nyctores fights, moves and warns the user on their own without any consent), Time Manipulation, Memory Manipulation, Chaos Manipulation, Mind Manipulation, Corrosion Inducement, Transmutation, Existence Erasure/Void Manipulation and Corruption (Type 3) (Is stated to be similar to the Black Beast, which is stated to be a cauldron gone haywire, and Cauldrons are capable of these abilities), Heat Manipulation, Earth Manipulation, Weather Manipulation, Air Manipulation, Extrasensory Perception, Size Manipulation, and Deconstruction (Scales from the Black Beast due to being identical to it, which is capable of doing these abilities in Phase Shift), Poison Manipulation, Madness Manipulation, Biological Manipulation and Statistics Reduction (Is made of seithr, which is poisonous, can induce addiction and deteriorate bodies, as well as reducing the power of others)

Resistant to the following: Empathic Manipulation (The Nox Nyctores can shut down the user's emotions), Radiation Manipulation (Can cancel out radioactive materials with seithr, making it ineffective against the toxic substance), Poison Manipulation, Madness Manipulation, Biological Manipulation and Statistics Reduction (Everybody can resist Seithr to some extent which is poisonous, can induce addiction and deteriorate bodies as well as reducing the power of others), Mind Manipulation (Able to resist the boundary/cauldron, which when entered or get closed, will result in taking infinite information, dating across beginning of time and all possibilities), Law Manipulation, Water Manipulation, Earth Manipulation, Fire Manipulation, Air Manipulation, Darkness Manipulation and Light Manipulation (Exists outside of Logic, the fundamental rules of the world, which includes the 4 elements and two great origins), Corrosion Inducement (Resists getting corroded by the Cauldron), Heat Manipulation (Scales from the Black Beast, who's unaffected by the intense heat from the cauldron), likely Absorption (Can fight the Black Beast without being absorbed into its being), Absolute Zero and Life Manipulation (Could withstand Yukianesa's strikes, which can freeze Azrael and erode away life), Soul Manipulation, Healing and Regeneration Negation (up to High-Godly), and Fear Manipulation (Is capable of fighting against Ragna with the Azure, which can inflict soul damage beyond the help of a multiversal entity, and negate any form of Recovery, is also unfazed by his passive fear hax, can withstand the blows of the Azure, which is far superior to the Nox Nyctores, which are also superior to Ars Magus, weapons that are capable of killing the Black Beast, a creature that has the ability of Self-Observation, which is what Terumi used to regenerate from Hakumen's Time Killer), Power Nullification (Is able to use its powers despite Kushinada's Lynchpin being activated), Explosion Manipulation and Spatial Manipulation (Was able to withstand Bolverk, which can pierce through space), Phenomena Intervention (Is outside of Logic, which makes it unaffected by the Takamagahara System) and Chaos Manipulation (Resists boundary which turns everything to spiraling chaos)

Same as Before, plus Immortality (Type 1, 2, 3, and 4; is capable of observing itself), Regeneration (High-Godly; Due to its nature as the Embryo, it has similar observation skills to Noel, who's at least comparable to Terumi, who was capable of regenerating from Hakumen's Time Killer, which is superior to the cauldron's Existance erasure, which can erase someone from the past, present and future), Memory Manipulation (Was capable of mind wiping all versions of the characters in Blazblue with the exception of a few with its presence, who are able to tank Hazama/Terumi's Ouroboros chains, which is shown to bypass the cauldron's mindhax resistance), Shapeshifting (Was able to turn its body into the embryo), Large Size (Type 9; Stated by Izanami to contain infinite worlds within itself), Higher-Dimensional Existence, and Absorption (Is the embryo itself, which grants it the same abilities as the embryo), Phenomena Intervention (Is capable of creating Phenomena Interventions due to being the embryo)

Attack Potency: Small Country level+ (Obliterated the Hierarchical City of Ibukido in an explosion visible from space) | Large Planet level (As strong as the Black Beast) | Multiverse level+, likely Low Complex Multiverse level (Embryo is as big as a universe, due to it reflecting infinite possibilities. Either absorbed or destroyed all of the possibilities, which is said to be infinite multiple times. Should be far above Raquel's Embryo, which was able to observe Boundary itself, an infinite expanse beyond time and space)

Speed: At least FTL (Comparable to characters who can dodge his energy beams and should be much faster than Tsubaki) | At least FTL (Should be faster than before) | Immeasurable (Embryo is capable of operating and traveling inside Boundary, which is a dimension beyond space and time). Omnipresent on the inside.

Lifting Strength: Class T (It's weight threatened to sink the island of Ishana)

Stamina: Infinite as long as it has seithr and souls in its disposal.

Weaknesses: Same as the Black Beast; people who exist outside of Logic, or that have extremely powerful magic power.