Giant squids (Architeuthis dux) are large cephalopods that live within deep ocean waters worldwide. They are one of the largest of all living invertebrates, with an estimated maximum length and weight of 13 meters and 275 kilograms. They have a wide array of powers and abilities, including Large Size, Light Manipulation, and Surface Scaling.

Gender: Can be either male or female

Durability: Wall level (Although their skin is rather vulnerable to slashing, their body has giant, thick and durable levels of muscle able to withstand blows from sperm whales)

Stamina: High (Constantly has to swim in order to avoid sinking)

Weaknesses: Giant squids will die if they are outside of water for an extended period of time. They must swim continuously or they will quickly sink.

Feats: Can withstand over thirty atmospheres of water pressure. Their suction cups can leave scars on sperm whales, whose skin can be up to 14 inches thick in some places. Some giant squids have been said to attack and damage boats in the past, creating the mythical Kraken stories.

Note: Little is known about the giant squid, due to the remote locations they live in and their elusive nature. Their true capabilities may be higher than listed. 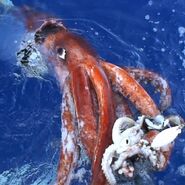