Gial Ackbar was a veteran male Mon Calamari warrior. Born on Mon Cala in 50 BBY, he had an illustrious career as Captain of the Mon Calamari Guard, even playing a key role in the Republic’s victory at the Battle of Mon Cala in 20 BBY. During the reign of the Galactic Empire, Ackbar being a member of the Alliance to Restore the Republic alone was enough of a motivator for the already anti-imperial Mon Cala people to take the side of the Alliance. The Mon Calamari people and their powerful ships would form a bulk of the forces of the alliance’s starfleet. Ackbar would serve as Fleet Admiral for the Alliance Fleet and became a key member of Alliance High Command by around 0 BBY. From his personal flagship, the MC80 star cruiser Home One, Ackbar would go on to lead the Alliance Fleet to victory after victory; most notably during the space portion of the pivotal Battle of Endor in 4 ABY.

After the establishment of the New Republic, Ackbar served as Fleet Admiral of the New Republic Starfleet and led many successful campaigns; such as the one to capture the prestigious and heavily defended Kuat Drive Yards, to liberate the planet Akiva where a meeting of important imperial remnant leaders was taking place, the liberation of the Wookiee homeworld of Kashyyyk, and the battle of Jakku which was the final desperate stand of the unified imperial remnants. Some time after this battle, he retired to his homeworld while continuing to offer political support for his good friend Leia Organa. Some time after 28 ABY, Ackbar joined the Leia Organa led Resistance movement against the First Order, serving as the Resistance Navy Fleet Admiral.

Tier: 9-B with physical strikes. 9-A with blaster batons/spears

Attack Potency: Wall level with physical strikes (Capable of trading blows with and even overpowering an Aqua Droid. Decapitated an Aqua Droid with a single headbutt. Should be comparable if not slightly superior to his much smaller peers in the Mon Calamari Guard, who have proven themselves capable of shattering the chassis of an Aqua Droid with a single well placed blow). Small Building level with blaster batons/spears (These weapons are overall at least as powerful per shot as the blaster carbines and heavy blaster rifles favoured by ARC Troopers)

Speed: Likely Peak Human on land (Capable of taking on three simulated Stormtroopers in a training session and overpowering them all without any of them being able to react), Superhuman underwater (Comparable to Aqua Droids, ran rings around one in melee combat)

Lifting Strength: Unknown, likely Peak Human (Capable of hurling one human by his head against another with ease)

Durability: Wall level (Should be no less durable than Lee-Char, who was hurled into a solid stone wall by Darth Vader with enough force to make a small crater in said wall and, although in pain, was uninjured and able to keep standing)

Intelligence: Very High. Highly skilled and dangerous combatant and highly skilled with various weapons. Was leader of his home world’s most elite military unit at a relatively young age. Seen fit to train the future ruler of his homeworld (which he was highly successful in). Outstanding strategist & tactician who has lead numerous successful campaigns (often against enemies with technological and numerical advantages). Brilliant military leader who can inspire confidence in those around him but at the same time knows when to cut his losses and make a tactical retreat.

Note: This profile covers Gial Ackbar as he appears in the “Disney” Canon only. 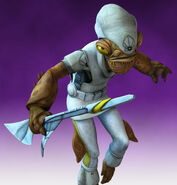 The MC80 star cruiser Home One was Ackbar's personal flagship 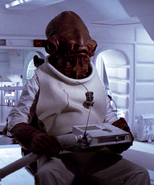 Ackbar on the bridge of the Home One

Retrieved from "https://vsbattles.fandom.com/wiki/Gial_Ackbar?oldid=4111864"
Community content is available under CC-BY-SA unless otherwise noted.