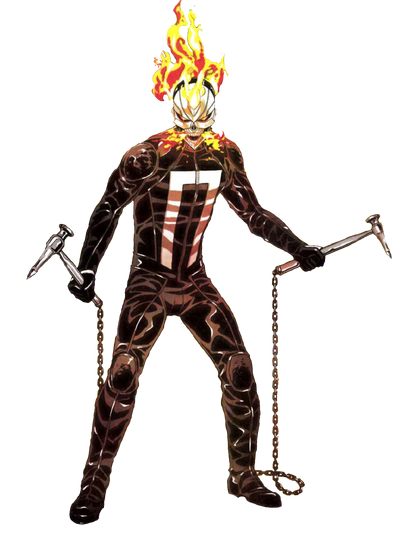 Despite being a talented car mechanic in his hometown of Los Angeles, Robbie Reyes never saw a bright future on the horizon. But when he stole a muscle car and took it out on a race, Reyes was met by an accident, however, instead of dying, he was ressurected a demonic being, granted this power by his deceased uncle Eli Morrow, a serial killer and demon worshipper.

Coming in to reconciliation with his powers, he set out to rid the world of scum and villainy as the All-New Ghost Rider.

Classification: Human, Vigilante, Mechanic | As before, User of the Spirit of Vengeance

Powers and Abilities: (Note that there is no distinction between his keys in this section yet)

Superhuman Physical Characteristics, Multiple Personalities, Self-Sustenance (Type 1, 2 and 3), Regeneration (Low-Mid), Intangibility, Chain Mastery, Vehicular Mastery, Fire Manipulation, Hellfire Manipulation, Can condemn his enemies to Hell, Rage Power, Can mind attack/make people suffer proportionate punishment for their sins with the Penance Stare, Can summon his car, the Hell-Charger, Portal Creation and Limited Teleportation (Can only do so through darkness). Limited Statistics Amplification, Transmutation, Possession and Power Bestowal (Only acts when using vehicles and mechanical beings large enough that he can ride them). Limited Resistance to Penance Stare (Robbie himself is unaffected by its effects, but his source of power, Eli Morrow, is harmed by it), Purification (Exorcism can never get rid of the Spirit of Vengeance)

Non-Physical Interaction, Surface Scaling and Regeneration (Mid), more (Ghost Rider stated that Robbie didn't know everything the car could do)

Speed: At most Massively FTL+ combat speed and reactions (Comparable to She-Hulk and Hulk). Supersonic travel speed with the Hell-Charger (Can reach 6000 horsepower)

Stamina: High (Can keep fighting while being severely damaged.)

Intelligence: Average (Skilled Mechanic and Driver, as well as being an adept combatant.)

Weaknesses: His uncle's spirit, Eli Morrow, resides in him, and sometimes actively attempts to sabotage Robbie. Has a constant desire to kill.

Due to having a different source of power, possessing different abilities, and being explicitly stated as such, this version of Ghost Rider isn't a Spirit of Vengeance, and as such, refrain from scaling him to the other Ghost Riders.