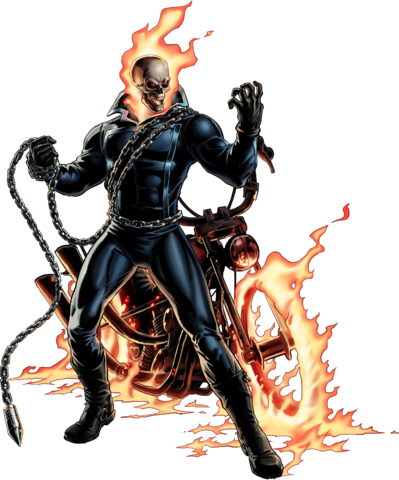 Ghost Rider is the name of several fictional supernatural antiheroes appearing in comic books published by Marvel Comics. This profile deals with the Johnny Blaze iteration of the character

The first supernatural Ghost Rider, stunt motorcyclist Johnny Blaze, to save the life of his father, agreed to give his soul to "Satan" (later revealed to be an arch-demon named Mephisto). At night and when around evil, Blaze finds his flesh consumed by hellfire, causing his head to become a flaming skull. He rides a fiery motorcycle and wields trademark blasts of hellfire from his skeletal hands. He eventually learns he has been bonded with the demon Zarathos. Blaze starred in the series from 1972–1983. The subsequent Ghost Rider series (1990–1998) featured Danny Ketch as a new Ghost Rider. In 2000s comics, Blaze again became the Ghost Rider, succeeding Ketch.

Powers and Abilities: Superhuman Physical Characteristics, Self-Sustenance (Types 2 and 3), Immortality (Types 1, 2, 3 & 8. Scaling from Cosmic Ghost Rider, another user of The Spirit of Vengeance. Is a part of God's power, and will be revived by God should he die but still be needed), Regeneration (At least High-Mid. Likely far higher, as he is listed as having "Godlike" regeneration, which is superior to characters able to regenerate from a single molecule), Resurrection, Telepathy, Soul Manipulation, Teleportation, Illusion Creation, Hellfire Manipulation, Fire Manipulation, Can mind attack/make people suffer proportionate punishment for their sins people with the Penance Stare, Transmutation, Self-Size Manipulation (Grew in size when fighting Thor), Statistics Reduction (Able to weaken magical enhancements), Mind Control (Able to control the minds of those he uses the Penance Stare on), Telekinesis (via Hellfire), Summoning (Can summon other Ghost Riders), Possession (His powers began to consume Rogue's body and mind when she attempted to drain them), Pocket Reality Manipulation, Explosion Manipulation, Immune to fire, heat, lava and flames, Resistance to Death Manipulation (Shrugs off instant death attacks from Null the Living Darkness and Death-Stalker), Size Manipulation, Matter Manipulation, Reality Warping (Reversed Null's powers through sheer force of will), Magic, Power Nullification (Resisted Doctor Strange trying to snuff out his powers and send him back to Hell. Immune to the effects of a magic spear that completely paralyzed multiple other superhumans), Mind Manipulation (Put up a fight against Doctor Strange trying to enter his mind), Purification (Exorcism can never get rid of the Spirit of Vengeance)

Attack Potency: Mountain level (Destroyed a Himalayan Mountain). Certain attacks ignore durability (The Penance Stare can harm enemies who are otherwise physically invulnerable. It can also destroy spiritual beings.) | Solar System level (Defeated the entirety of the Avengers in combat with ease. Doctor Strange believed an unrestricted Ghost Rider to be capable of defeating World War Hulk, and was terrified when Johnny Blaze lost control.), possibly Low Multiverse level (Zarathos has been shown as somewhat comparable to Mephisto, and an unrestricted Ghost Rider once defeated Mephisto)

Durability: Mountain level (Trades blows with and tanks hits from Angels and Demons who can endure his attacks.) Regeneration and immortality make him extremely difficult to kill. | Solar System level (Took hits from Thor with little to no damage), possibly Low Multiverse level (Battled Mephisto)

Intelligence: Was a stunt daredevil, and was born in Waukegan, Illinois, is also a formidable hand-to-hand combatant and has become quite adept at using his powers in combat situations

Weaknesses: Can only transform through an act of will or when innocent blood is spilled. Weapons forged in Heaven can harm him

Note: There are many versions of Ghost Rider, this profile deals with the Johnny Blaze version of Ghost Rider in the main 616 Marvel universe.

Discord (My Little Pony) Discord's Profile (Both were 4-B, Speed was Equalized)