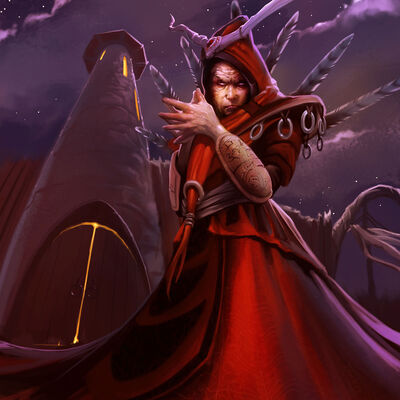 An extremely powerful nightsister and the Matriarch during and after the reign of the Galactic Empire, Gethzerion was quite possibly the greatest threat to Palpatine's rule after the Rebellion (namely Luke Skywalker, and by extension, Yoda). To this point, he stranded Gethzerion on Dathomir and did not allow ships to land, hoping to outlast her via immortality. She was eventually defeated by Luke Skywalker and her niece, Teneniel Djo. She attempted to escape, but was killed by Han Solo.

Age: Unknown, at the bare minimum 27, likely several decades older given her appearance

Attack Potency: Solar System level (Should be comparable to Mother Talzin. Stronger than Pre-Dark Empire Luke Skywalker. Like Talzin, Pre-Dark Empire Darth Sidious feared Gethzerion and saw her as a very credible threat, blockading Dathomir simply because she lived there. It's worth noting that the only time Sidious has ever shown more fear for an individual was with Grandmaster Yoda, who was stated multiple times to be the most powerful Jedi to ever live at that point).

Lifting Strength: Below Average or Regular Human (Is an aged, elderly humanoid who has clearly suffered degradation from use of Dark Side Magic, and thus is likely very weak physically), can be augmented to Superhuman levels via Force Amplification (Stronger than most force users)

Range: Extended melee range with lightsaber, dozens of metres with Force lightning and telekinesis, galactic with magic and telepathy via power scaling

Intelligence: High. Is a master of Nightsister Magic, even writing the Book of Shadows, which contains details about Nightsister spells, rituals and other magic, mastering these abilites to the point where Palpatine saw her as a credible threat. However, while powerful and possessing high knowledge of her field, she is not a skilled manipulator nor does she think of backup plans in case she finds herself at a disadvantage, simply trying to escape

Weaknesses: Similar to Vitiate and, to a lesser extent, Talzin, Gethzerion is not as dangerous with her lightsaber as she is with her force powers

Retrieved from "https://vsbattles.fandom.com/wiki/Gethzerion?oldid=6371801"
Community content is available under CC-BY-SA unless otherwise noted.