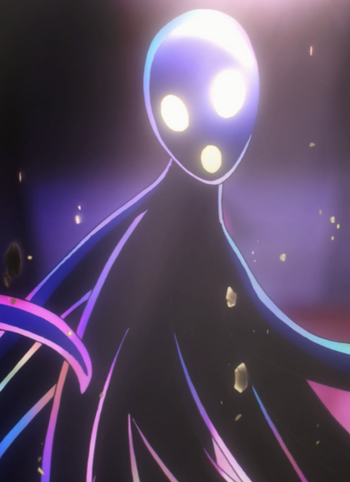 Geryuganshoop was one of the Dark Matter Thieves, a group of alien pirates traveling across the universe. He was one of Boros' strongest fighters, claiming himself to be the greatest psychic in the universe. Despite displaying immense power, he seemed easily flustered under pressure, and even after getting serious, was effortlessly killed when Saitama split his head with a rock.

Speed: At least Massively Hypersonic (Should be comparable to Melzalgald), with Relativistic+ attack speed (His attacks were stated by Murata in an interview to be near light speed)

Lifting Strength: At least Class M with telekinesis (As a dragon level threat, he should be a much more powerful Esper than Evil Eye)

Range: Hundreds of meters with psychic powers and telepathy.

Intelligence: Presumably high. One of the head officers of the Dark Matter Thieves.

Master Psychic Combatant: Geryuganshoop used its environment to its advantage, launching rocks at its opponents with its psychokinesis. It wields the ability to eliminate friction among the objects it throws, allowing it to throw objects at speeds approaching the speed of light without unintended consequences. It also claims to be the top psychic combatant in the universe.

Start a Discussion Discussions about Geryuganshoop