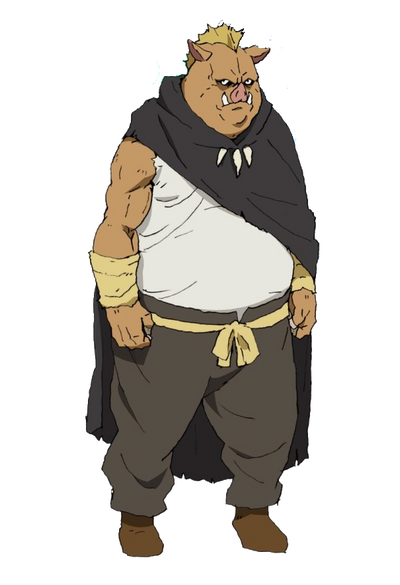 Gerudo is a former general in the Orc Army lead by Orc Disaster Gerudo, and the current general of the Yellow Corps in Rimuru's Army.

Powers and Abilities: Superhuman Physical Characteristics, Automatic Translation, Enhanced Senses, Extrasensory Perception, Telepathy, Dimensional Storage, Blessed, Unholy Manipulation (Monsters are made of magic energy, which can be purified or warded off by holy energy), Radiation Manipulation and Creation (Monsters of significant aura can create an aura akin to radiation, that is extremely toxic to organic life and can induce death in high concentration. It will cause monsters to be born due to the high concentration of magic energy), Unconventional Resistance to Power Nullification, Power Modification, Power Absorption and Power Mimicry (Skills are inscribed into the soul which resists any outside interference unless the interference is stronger than the soul's defenses, furthermore Unique Skills and above require a strong soul to possess them), Resistance to Magic (Has an innate resistance to magic), Radiation Manipulation, Information Manipulation (Magic Perception overloads the brain with so much information it would have killed a normal human, but can be used casually), Data Manipulation (The information from Magic Perception is turned into data, which overloads the human brain, but can be used casually), Memory Manipulation (Individuals surpassing A rank have high resistances, and their memories are protected by their soul), Fear Manipulation, Sleep Manipulation, Madness Manipulation, Empathic Manipulation (Superior to Holy Knights who resisted Diablo's Temptation and Demon Lord's Ambition), Soul Manipulation and Mind Manipulation (Has a strong soul which allowed him to cross the boundaries between worlds, and should somewhat resisted Yuuki's control like Hinata which can affect at least 350,000 people)

Powers and Abilities: Same as before plus Spatial Manipulation, Breath Attack, Regeneration (High-Mid), Madness Manipulation and Empathic Manipulation (Can cause his opponents to become panicked and if he desires it, can cause them to go insane or die of madness. Superior to Diablo who used this ability to cause 5 Holy Knights to panic and faint due to their overwhelming fear, ADL's can use it on a scale of at least 150,000 people), Self-Sustenance (Types 1, and 2), Non-Physical Interaction (Can harm spiritual lifeforms who have no physical body), Resistance to Attack Reflection, Perception Manipulation, Life Manipulation

Speed: Subsonic (Superior to the direwolf boss who could move faster than the goblins could see) | Hypersonic+ with Relativistic reaction speed (Comparable to Shion) | Relativistic+ (Comparable to Leon) with Massively FTL+ reaction speed (Because of Thought acceleration his thought processing capability is accelerated by a million to ten million times, which allows him to react to things he normally wouldn't be able perceive)