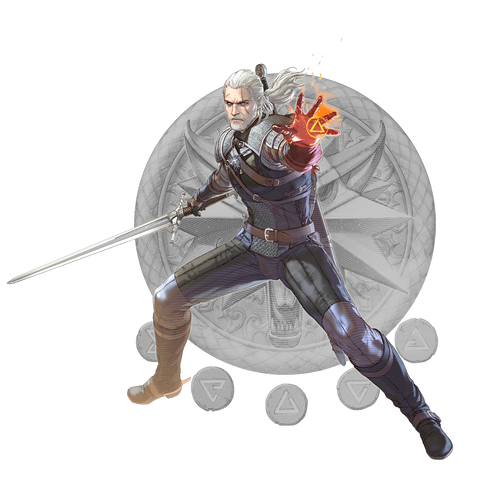 Geralt of Rivia is a guest character for Soul Calibur Vl. Geralt originates from The Witcher franchise and is a Witcher who goes by the title "The White Wolf". When on a mission, Geralt is suddenly sent to Astral Chaos in which he was attack by a Malfested. After defeating the Malfested, he ended up in the Soul Calibur universe. Here he came into contact with Zasalamel and later the Libra of Soul Protagonist and Mitsurugi who would then become a friendly rival to him. Afterward he would return to his world. Geralt along with 2B are the first guest characters to be canon to the Soul Calibur series.

Name: Geralt of Rivia, "The White Wolf", The Butcher of Blaviken

Lifting Strength: At least Class 5 (Can wrestle with rock trolls who have boulders in their back. Could block Imlerith's mace while weakened, and later lift it to crush his skull), possibly Class 25 (Can lift a portion of a dragon's body, could stop a giant creature while it was sprinting).

Durability: Large Town level+ (Can take hits from characters on that level), higher with Quen (Able to tank what would otherwise be lethal attacks)

Intelligence: Gifted. Incredibly skilled alchemist and monster hunter with many decades of experience. Trained and carefully developed from birth for combat and missions. Was trained by Vesemir, a Witcher with at the time over a century of experience. As a Witcher, Geralt is highly knowledgeable about the anatomy and weaknesses of humans and monsters. He is also a wise individual, intelligent in handling social situations and bargaining. Could also find a way to win a game with Gaunter O'Dimm and find out where he could find him in his world with his rules.

Weaknesses:  Can only use a small number of signs consecutively before needing to recharge, taking too many potions can poison and kill him. His weapons require time-to-time maintenance to work at peak condition. Crossbows take some time to reload. Lethal injuries that would otherwise kill a man take him months to recover.