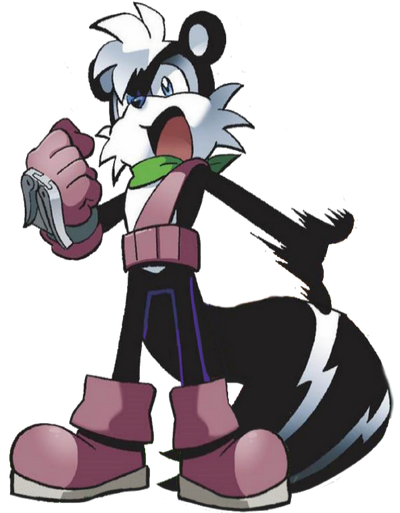 Geoffrey St. John was the leader of the Kingdom of Acorn's Royal Secret Service. Following the organization's destruction at the hands of Dr. Ivo Robotnik, Geoffrey reestablished it in honor of his father, Ian St. John, who was also his predecessor. Following Robotnik's military coup, he gathered the few remaining members of the old Secret Service and formed them into the Rebel Underground, an organization originally proposed to King Maximillian Acorn but never put into action. After some time working independently, his group met the Knothole Freedom Fighters, and after a number of meetings began working together with them. Geoffrey served the Kingdom and later the Republic of Acorn loyally, but eventually revealed that he recognized Ixis Naugus as the rightful monarch, having served as his apprentice for years. He ended up having his body taken over by the corrupted king when he attempted to defect from his position.

Range: Standard melee range. Hundreds of meters with his abilities and equipment.

Intelligence: Genius tactician and combatant. Groomed by his father at a young age to serve the Kingdom of Acorn, Geoffrey is an ingenious fighter with years of experience fighting against diverse opponents. Once the leader of the Royal Secret Service, where members are formally trained in “every method of armed and unarmed combat”, Geoffrey has been capable of outmaneuvering and outfighting multiple Freedom Fighters at once and back to back without being hit once, outwitting the warlord Dr. Robotnik, and going head to head with the famed Hero of Mobius. Additionally, Geoffrey excels in espionage and deception, working undercover as an Ixis apprentice for years and formulating a plan that would disrupt the political climate of the Kingdom of Acorn and trick its citizens into accepting Naugus as king.

Weaknesses: Geoffrey does not cooperate well with allies. Can easily become enraged at the mention of his deceased wife.

Retrieved from "https://vsbattles.fandom.com/wiki/Geoffrey_St._John?oldid=5857112"
Community content is available under CC-BY-SA unless otherwise noted.