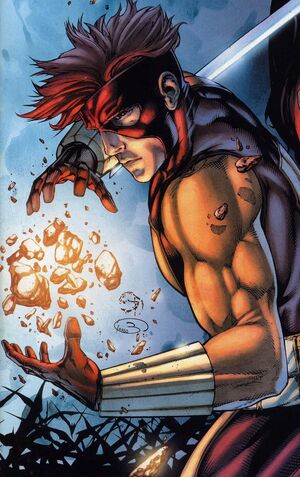 Geo-Force (Brion Markov) is a fictional superhero appearing in comic books published by DC Comics. Markov is the former Prince of Markovia (which he later becomes king of) and the half-brother to the deceased Terra of the Teen Titans. One of the founding members of the superhero group the Outsiders, led by Batman, he was later appointed leader of the group until its disbandmnet. Geo-Force first appeared in a special insert in The Brave and the Bold #200 in July 1983, but became a regular in Batman and the Outsiders in August 1983. The character was created by Mike W. Barr and Jim Aparo.

Attack Potency: Unknown (Able to contain explosions by using his gravity beams) | Moon level (At full power, he was able to cause tremors all over the globe and knock the earth off its axis, which would require 5x10^29 Joules)

Speed: At least Supersonic with flight (Stated by Black Lightning to be capable of traveling 1,000 miles in a relatively short time frame, saved a woman from being eaten by a shark in the time it took to shut its mouth)

Durability: Unknown (Able to tank multiple large explosions without visible injury other than to his suit) | Moon level (Able to withstand the devastation he generated while touching the ground)

Weaknesses: Becomes weaker the longer he is not touching solid earth (Flying for over one thousand miles nearly strips him of his powers), Bulletproof but can still be harmed by slicing weapons

Geo-Force is more powerful the closer he is to the Earth. Grounded and at full power, he has demonstrated country level devastation. However, his normal power levels rank in the small nuclear territory.

Also, unlike many DC superheroes, Geo-Force does not have a Pre-Crisis version of himself. Despite the character first appearing in Batman and the Outsiders, published in 1983, the comic line continued publication into the Post-Crisis world of New Earth, which was set up after the events of Crisis on Infinite Earths. All the stories concerning The Outsiders from Pre-Crisis continuity were made canon in Post-Crisis continuity.