Genthru (ゲンスルー, Gensurū) is the leader of the now defunct Bomb Devils, alongside members Sub and Bara; he is among the players trying to clear the game Greed Island. He is also known as the Bomber among Greed Island players. Genthru serves as the main antagonist of the Greed Island arc.

Tier: At least 9-A, higher with Countdown

Powers and Abilities: Superhuman Physical Characteristics, Nen Manipulation (Conjurer; Genthru is a powerful Nen User being proficient in Conjuration, Emission, Manipulation and Enhancement including all the basic and advanced techniques. Genthru's Ren is quite powerful being able to induce fear into Gon. Biscuit stated he has more aura than a neutral Gon. Genthru can also read the opponents movements through their aura flow), Master Hand-to-Hand Combatant (Effortlessly stomped Gon in a fight), Acrobatics, Subjective Reality and Explosion Manipulation (Genthru's Nen ability allows him to create explosions from his hands. His more lethal ability is Countdown which is a Conjuration, Emission and Manipulation ability. He conjures a bomb after he fulfils certain rules he set), possibly Spatial Manipulation and Law Manipulation (Kurapika stated that it was a forte of Conjurers to create or detach a space and impose laws)

Attack Potency: At least Small Building level (Much stronger than Greed Island Arc Gon. Gave him a severe beat-down despite not using his Nen ability and trying not to kill, Genthru could conjure sixty bombs at once which speaks for his Actual Aura Output. Biscuit stated he has a lot of aura to be able to use Little Flower. Even at the end of Greed Island he was still more powerful than Gon and Killua according to Abengane), higher with Countdown (Countdown is ten times more powerful than Little Flower)

Speed: Hypersonic (Reacted to a sneak attack from Jispa. Blitzed Gon in their fight)

Lifting Strength: Class 50 (He is physically stronger than Killua Zoldyck)

Striking Strength: At least Small Building Class (Much stronger than Gon and sent him flying several meters with a single kick.)

Durability: At least Small Building level (Able to withstand his own explosions with Gyo. Retained consciousness despite being hit by an attack with 70% aura and using only 10% aura to defend himself from Gon Freecss)

Stamina: Immensely High (Should be comparable if not superior to Gon and Killua, who can run kilometres without breaking a sweat. Was able to chase after Tsezguerra and his team for several days without tiring)

Intelligence: Gifted. Easily the most intelligent of the three Bombers. Genthru is an excellent strategist and tactician, which he demonstrated both in his capabilities as a card collector and as a strategist/tactician when up against Tsezguerra's group. He is also an exceptional fighter and Nen User, capable of effortlessly and repeatedly overpowering Gon in combat during their confrontation, receiving a critical hit only due to his underestimating his opponent.

Weaknesses: Underestimates his opponents who are physically weaker and inexperienced, needs to touch opponent to use Little Flower and needs to use Gyo to cover his hands when using explosions, which can give away whether he will use Little Flower or not in a particular instance to those that know of this. He must touch the target and say "Bomber" as a condition to activate Countdown. Genthru must explain his ability Countdown as a condition for activation. Victims can disable Countdown by making physical contact with Genthru and saying the phrase "I caught the bomber." Zetsu involves keeping one's aura exclusively in the body, it makes a Nen User more vulnerable to physical and Nen attacks, because one doesn't have any aura on the outside of one's body to protect oneself.

Nen: Genthru is a quite powerful Nen User being able to use all the basic and advanced techniques. He is also proficient in multiple categories. 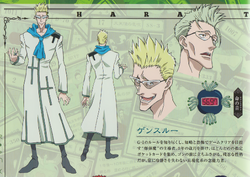 Genthru vs Gon
Add a photo to this gallery