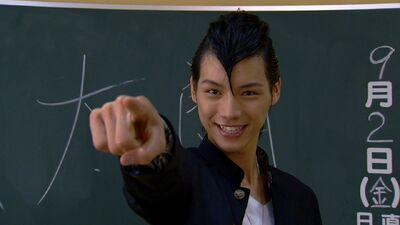 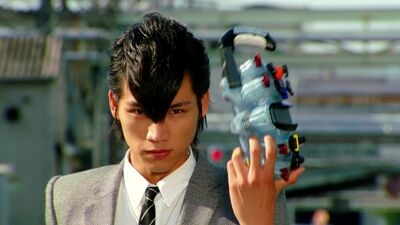 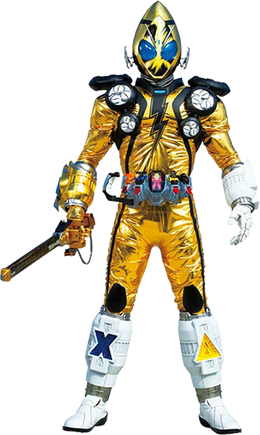 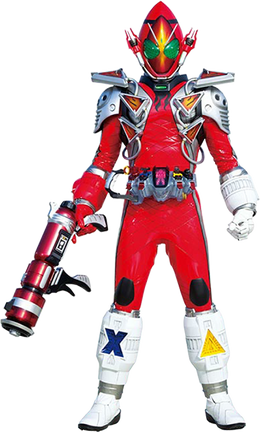 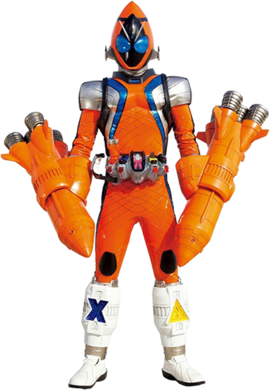 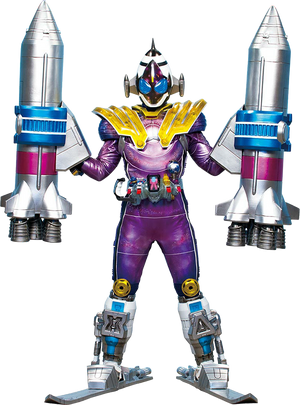 Gentaro Kisaragi (如月 弦太朗, Kisaragi Gentarō) is a second-year, later third-year, student at Amanogawa High School, who is very sociable and willing to take big risks in making friends with almost everyone he comes across. When he meets Kengo Utahoshi on his first day at AGHS, it starts the chain of events leading to him becoming Kamen Rider Fourze (仮面ライダーフォーゼ, Kamen Raidā Fōze) and the formation of the school's Kamen Rider Club. Eventually, his club grows in members as does his array of Switches to utilize as he eventually faces off against the Horoscopes which they learn is under the control of the school chairman Mituaki Gamou.

By 2017 in the future timeline of Movie War Ultimatum, after the events of Heisei Generations Final, Gentaro became an AGHS teacher and new advisor of the Kamen Rider Club and later reunited with his school mates.

Powers and Abilities: Transformation, Superhuman Physical Characteristics, Martial Arts (Learned some form of kickboxing from Haruka-sensei who is a a well-trained kickboxer), Weapon Mastery, Weapon Creation with Astroswitches (Allowing Fourze to manifest weapons of what the Astroswitches represents), Self-Sustenance (Type 1), Flight (By himself, Fourze can hover in the air for a short distance with the hover pack on his back), with Rocket Switch and Gyro Switch, Energy Manipulation with many of his Switches (Allowing Fourze to use energy-based attacks), Explosion Manipulation with Launcher Switch (Allowing him to attack enemies from a far distance by launching 5 missiles to attack an enemy) and Stamper Switch (How this Module works is first Fourze would kick a Zodiarts with the Stamper, the Module boosting his kicking damage when the hydraulics kick in, leaving a "stamp" of the Kamen Rider Club logo. The "stamp", after 15 seconds, explodes with a focused blast, doing additional damage), Enhanced Senses with Radar Switch (Allowing him to detect any enemies that are not visible and reflect certain waves, as well as make contact with the Rabbit Hutch. The module can also be used with the Launcher Module to launch very precise homing missiles), Technology Manipulation with Camera Switch (Allowing him to view far distances and see things that normally isn't noticed) and is generally used to operate the Burgermeal Foodroid), Sound Manipulation with Beat Switch (Resembling a small subwoofer that can produce sonic waves with a range of 20Hz-5kHz and a tweeter with a range of 5kHz-24kHz), Smoke Manipulation with Smoke Switch (Allowing him to emit smoke within a 5 mile radius for 5 minutes which can obstruct an opponent's vision in close combat, not to mention disorientate said opponent from the choking smoke), Light Manipulation with Flash Switch (Allowing him to blind enemies with the light of the sun at full power), Invisibility with Stealth Switch (Allowing Fourze to become invisible for 5 seconds), Limited Vibration Manipulation with Hammer Switch Allowing Fourze to do incredible damage with it. He can also slam the Module onto the ground to make a shock wave travel through the ground to floor a Zodiarts), Water Manipulation with Water Switch (Allowing him to shoot intense streams of water from the nozzle for ranged attacks), Healing with Medical Switch (Which gives him access to various medicines made from Cosmic Energy), Text Manipulation and Power Nullification with Pen Switch (When swung, Fourze can make three-dimensional objects on any surface from the "ink", which can serve as either improvised shields or to reveal invisible enemies after the ink hits its mark. What the material the solidified "ink" is made of is none other than pure carbon. It has a Limit Break, where Fourze covers the foe in the Pen Switch's ink to disable any special abilities a Zodiarts might have), Surface Scaling with Wheel Switch, Underwater Breathing (Type 3) with Screw Switch (Allowing him to propel himself underwater without tiring himself out), Ice Manipulation with Freeze Switch (Allows him to emit super cold vapors to freeze liquids in a mere instant), minor Gravity Manipulation with Giantfoot Switch (Allows Fourze to focus and amplify gravity at a localized point to bring opponents down, by stomping his foot on the ground, or, in later instances, swinging it around. A mirage of the Giantfoot Module appears as part of the localized point as a side effect, making Kamen Rider Fourze seem like he is mentally creating a construct of Cosmic Energy to crush his opponents), Air Manipulation with Aero Switch (Allowing him to suck in large quantities of air so it can then be pressurized and expelled to either lift Fourze off of the ground, or direct the pressurized air at a target to disorient it from the intense winds), Forcefield Creation with Net Switch (Allowing him to create a electromagnetic net to scoop up incredibly tiny objects by swinging his leg. If the tiny objects turns out to be a Zodiarts, the net will recombine the broken-up pieces and force the Zodiarts to stay together, all while binding the arms together), Electricity Manipulation and resist to it as Elek States, Fire Manipulation, Heat Manipulation and Fire absorption (Can absorb heat-based attacks to enhance its own) and resist to it as Fire States

Powers and Abilities: All previous Base States and Astroswitches powers, plus Energy Projection (N/S Magnet Cannon which are equipped/placed on his left and right shoulders respectively to fire bolts of electromagnetism akin to a rail gun, which the movement is controlled by the NS-MagPhone that has split into the Magnet Switches to be serve as joysticks in the Fourze Driver. The joysticks also have the triggers, allowing Fourze to fire the Cannons, Magnetism Manipulation (In Magnet States, Fourze has the ability to manipulate magnetism by attract anything that can be magnetized, then send it towards the attacker. It can also fire a tornado of electromagnetism at a Zodiarts), Gravity Manipulation (Can fire a burst of electromagnetism that slam into the enemies, tearing apart the "internal organs" or envelope them inside a forcefield, then compressed them until they imploded)

Powers and Abilities: All previous States and 40 Astroswitches powers, plus Portal Creation (In this form, Kamen Rider Fourze can also perform a warp drive and open a portal to the Earth's magnetosphere), Possible Resistance to Power Nullification and Sleep Manipulation (Heavily implied that Aries Zodiart powers won't do anything to him in this form and seemingly can shrug it off like nothing)

Powers and Abilities: All previous Cosmic States and Meteor Switch (and Nadeshiko Switch in second Fusion States) powers, plus Martial Arts (This States can use Meteor's Jeet Kun Do style)

Attack Potency: Athlete level (Comparable to Ryusei who is a martial arts master) | Small Town level (Harm the Orion Zodiarts who got hit with that without sustaining so much as a scratch) | At least City level (Can matched against Supernova Zodiarts whose power containing a mass quantity of Cosmic Energy, that emit a city-wide explosion) | Likely Large Island Level (Pushed the Space Ironman XVII into the Moon), higher as Meteor Fusion States | Planet level, possibly Solar System level as Cosmic States (Destroyed the Enigma Limbs, along with Kamen Rider OOO, Gaim and Ghost which were physically pulling two planet earth's towards one another), higher as Meteor Nadeshiko Fusion States

Stamina: Very High (Can still able to fight despite being heavily injured and exhausted from his previous battles which take place only a few minutes ago)

Intelligence: Above Average (Gentaro is shown to become increasingly adept in using the Kamen Rider Fourze system as the series progresses. He is shown to only be able to use conventional fighting moves and has to rely on Kengo's advice on which Astro switches to use in battle situations early in the series. As he gets increasingly used to fighting the Zodiarts, he learns how to devise strategies on the fly (though they do not always work and Kengo still needs to be around most of the time) and is seen to be using and changing Astro switches more often. He is shown to be very resourceful with the use of Switches as he learns how to utilize each one in unusual ways, such as using Limit Breaks of Launcher, Gatling and Fire Switches together to form a long-range Limit Break finisher, and Limit Breaking the Rocket and Drill Switches twice when he cannot finish Scorpio off with just his usual Rider Rocket Drill Kick. When he has difficulty with properly using a Switch, he will take the time to understand it as he did with the Hopping Switch, ending up capable of using it as a weapon instead of just a tool. In the movie Everyone, Space is Here!, he was able to use all 40 Astroswitches effectively, rapidly changing switches to counter against the Fake Horoscopes and defeat majority of them)

Weaknesses: The downside of this Cosmic States is that it is powered by Gentaro's bonds with the Kamen Rider Club, and it can't be accessed when any of his friends cut their bonds with him.