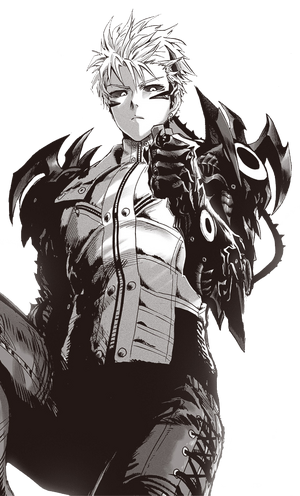 Genos is a 19-year-old cyborg and a self-proclaimed disciple of Saitama, despite being of a higher ranking than him. He is always aiming to become stronger and fights for justice. As a registered hero, he is in the S-Class, at rank 14.

Stamina: Very high with the Core

Standard Equipment: His Core, a special device that supplies energy for all of his functions, Various attachments and upgrades including:

Intelligence: Genos is an experienced combatant who has seen many battles, claiming to have destroyed countless monsters and criminal organizations single-handedly. He's skilled in both close and long-range combat, being able to rapidly assault foes with flurries of punches and effectively snipe targets with his Incineration Cannons. In addition to his combat prowess, Genos is also rather intelligent, earning a perfect score on the Hero Exam, which includes a significant written/testing portion, and instantly ascended to the position of S-Rank Hero. However, his youth and impulsiveness make him careless at times, which leads to his defeat on numerous occasions. Since his fight with Sonic, he has begun using trickery to gain the upper hand in battles, such as using adhesive gel to trap faster opponents

Weaknesses: Careless in combat at times (gets injured and dismantled a lot due to letting his guard down many times), The Core has a limited power supply, and he will cease to function if it is destroyed. He seems to have terrible luck, frequently going up against foes that are far beyond his capability to handle

Expert Hand-to-Hand Combatant: Genos can utilize his various enhancements to distract opponents and calculate how powerful they are, as well the exact amount of power he'll need for battle, and as the series goes on, Genos improves his skills and capabilities as a cyborg. He makes use of a large variety of weaponry and upgrades in battle, and is a very capable fighter in both close quarters and long-range fighting. He is skilled enough in hand-to-hand to fight the likes of Speed-o'-Sound Sonic and Deep Sea King and, even at a disadvantage he could fight Deep Sea King for a long period of time despite having just one arm. However, he's still not a match for other extremely skilled fighters such as Bang or Garou. 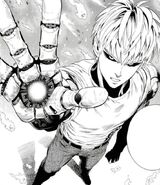 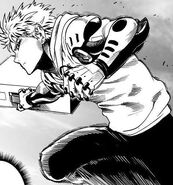 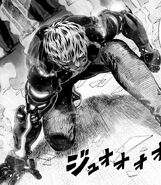 Post-Monster Association Raid (Webcomic)
Add a photo to this gallery