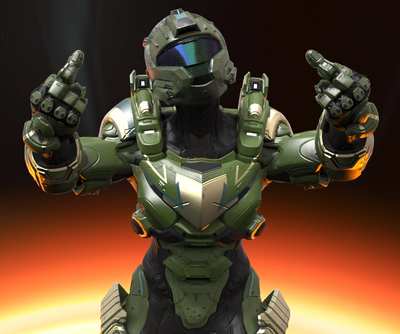 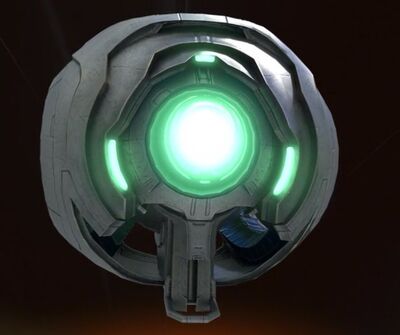 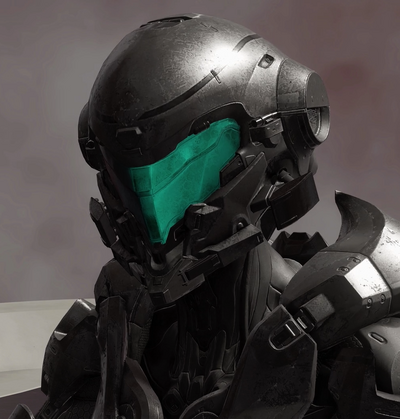 This profile contains spoilers for Red vs Blue Season 17. Proceed with caution.

Genkins is a character introduced in Season 16 of Red vs. Blue. He is introduced as a member of the Cosmic Powers and is the God of Trickery, the son of Atlus Arcadium Rex, King of Gods, and Kalirama, Goddess of Death, War and Annihilation. He is the grandson of Chrovos, God of Time, and brother to Destiny and the Fates.

Though introduced as a God, he is in actuality a hyper-advanced Artificial Intelligence created by his "parents" - who share the same designation - merely posing as deities. Due to the Cosmic Powers being A.I. in possession of extremely advanced technology developed over the course of Eons, they are god-like beings that are worshipped as divinity by aliens across the universe, including the RVB-version of the Covenant.

As Chrovos, he is a version of Genkins who travelled back in time to the beginning of the universe, at the point of the Big Bang. Over the eons, his power grew. He eventually created the Cosmic Powers and in his power-trip, usurped the name of his grandfather, Chrovos. He would soon be stopped by his own children and locked away for the rest of eternity, until such time as his other self is born and the cycle begins anew.

Age: Billions of years old | Older than the Universe

Attack Potency: At least Small Building level (He is physically comparable, if not superior to Labyrinth, who defeated Agent Carolina in hand-to-hand combat), higher (w/ Monitor Laser, which can one-shot characters with similar armor as Carolina). Unknown with Black Hole Gun. | At least Moon level (Comparable, if not superior to Atlus, whose serious attacks can shatter the Moon).

Speed: At least Subsonic+, with Supersonic reaction speed (massively superior technology and capabilities as a proper A.I. makes him superior to people such as Agent Texas, who can outrun heat-seeking missiles, and Epsilon, who can perceive time slow enough to formulate entire battle plans, complete with on-the-spot research and several perfect calculations, in the time it takes for a bullet to leave a rifle's muzzle) | At least Subsonic+, possibly higher, with Supersonic reaction speed.

Lifting Strength: At least Class 100 (should be superior to Texas, who easily flipped over a tank) | Unknown

Durability: At least Small Building level, likely higher (can take blows from Labyrinth, who can match Carolina) | At least Moon level (Can withstand serious blows from the combined forces of Atlus, Kalirama and Burnstorm).

Stamina: Extremely High, likely Infinite. All of the Cosmic Powers endlessly generate their own internal power over time and require no outside power source to function at their peak. Chrovos lived from the beginning of time and only gathered energy over the Eons as opposed to losing it.

Intelligence: At least Gifted, likely much higher. Outsmarted the Cosmic Powers, and even Chrovos, on multiple occasions. Has knowledge of technology and sciences developed by the Cosmic Powers and their influenced alien races since the birth of the universe, though the exact depth of this knowledge is unknown.

Weaknesses: Genkins is arrogant and emotional, though it does not visibly hamper his intelligence. He seemingly possesses no notable martial skill outside of being a good marksman, despite possessing a melee-oriented primary weapon. Despite being able to perceive time like other advanced A.I., his body cannot move as fast as he can see and think. | Less intelligent than before due to having gone insane with power, as they were outsmarted on at least two separate occasions by their own younger self.