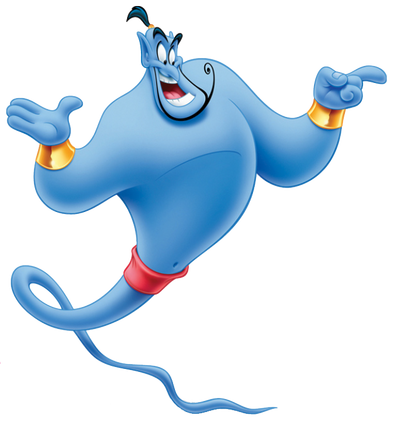 Genie is a major character in Disney's 1992 animated feature film, Aladdin. He is a powerful spirit residing in a magical oil lamp hidden within the Cave of Wonders.

Attack Potency: Solar System level (Capable of growing to this size, roughly comparable to Genie Jafar, but presumably weaker due to Jafar wishing to be an all powerful Genie. Far superior to his Freed State and Goblin Aziz, who turned into three stars upon defeat) | Star level (Spun and held the Earth in his hand, and turned Saturn into his face. Did the same as with Saturn, but with the Sun)

Lifting Strength: At least Class Y (Should be stronger than when freed) | Class Y (Held the Earth in his hand)

Speed: Massively FTL+ (Comparable to Jafar and expanded into space) | Relativistic (Spun the earth at this speed) with Massively FTL+ travel speed (Created a spaceship capable of going through the cosmos)

Intelligence: While incredibly inventive with his powers and general abilities, Genie has proven to be rather naive at times.

Weaknesses: Genie cannot directly kill, he cannot make people fall in love, and he cannot resurrect people (However it has been implied that he can revive people, but he just prefers not to do it due to the revived becoming "zombies"). Sometimes, he is a bit naive. His powers were stated to have been significantly lessened after being freed.

Discord (My Little Pony) Discord's Profile (Both were 4-B, Speed was Equalized, Battle took place in a desert)

Four (Battle for Dream Island) Four’s Profile (4-B keys used, speed was equalized, and Four had the Anti-Flying Button along with limited prior knowledge about Genie’s weakness)