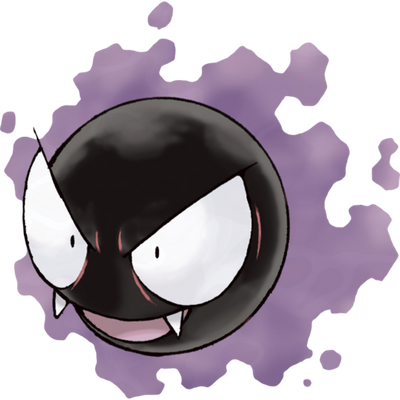 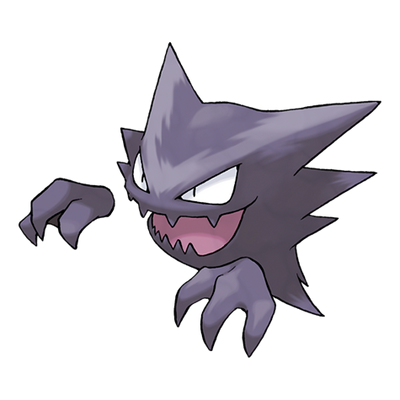 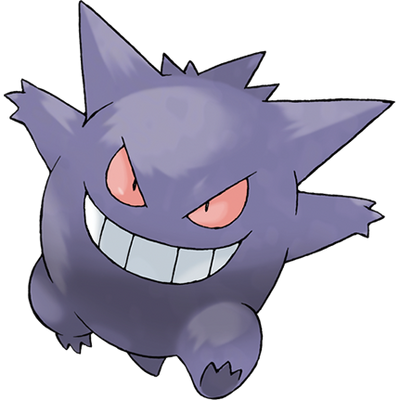 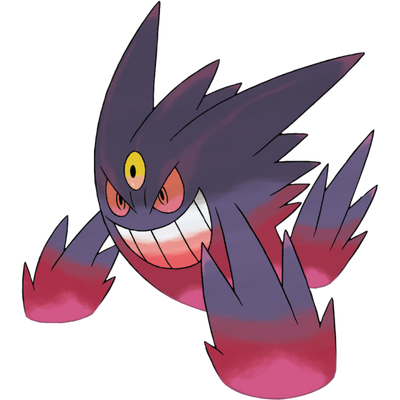 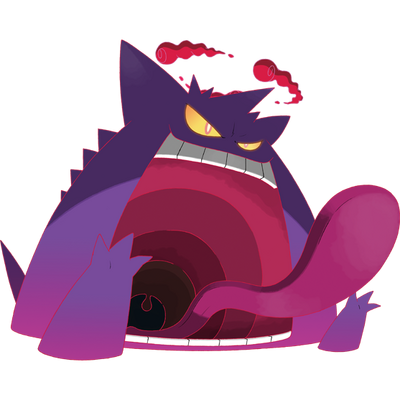 Gengar (Japanese: ゲンガー Gangar) is a dual-type Ghost/Poison Pokémon. It evolves from Haunter when traded. It is the final form of Gastly. It can Mega Evolve into Mega Gengar using the Gengarite. Gengar is a dark purple, bipedal Pokémon with a roundish body. It has red eyes and a wide mouth that is usually curled into a sinister grin. Multiple spikes cover its back, and it has large pointed ears. Its arms and legs are short with three digits on both its hands and feet. It also has a stubby tail. It is also one of few pokemon capable of Gigantamaxing.

As Mega Gengar, a portion of its body sinks into the ground. The lower portions turn a more reddish purple, and a third eye appears on its forehead. This new unblinking eye is oval and yellow and allows it to see into other dimensions. The spikes on Mega Gengar's back are more numerous and pointed. Additionally, spikes appear on its hands and tail. Its ears are now considerably longer and project backward.

Gengar has the ability to hide perfectly in the shadow of any object, granting it exceptional stealth. However, Gengar's body acts as a heat sink; its presence cools the temperature of the surrounding area by nearly 10°F, because it absorbs the warmth. In addition, Gengar possesses the ability to fly through the air, as demonstrated in the anime.

Gengar is very mischievous, and at times, malicious. It enjoys playing practical jokes and casting curses, such as pretending to be one's shadow, then behaving erratically. When the quarry notices, the Gengar takes delight in its victim's terror. However, Gengar has been known to be loyal to a Trainer who treats it well. Gengar lives in shadows of rooms, caves, and dark places where shadows form. It is especially fond of urban areas such as cities and back alleys, but only during the night.

Gastly is Gengar's first evolutionary form. It has no true form, being made up solely of gas and grieving souls that possessed the gas. It is generally a playful trickster, but its gaseous body is extremely toxic, enough to suffocate and kill an Indian Elephant within just two seconds. This Pokémon shares Gengar's Ghost/Poison typing, and can generally be found in abandoned or decrepit buildings or graveyards, such as Pokémon Tower.

Haunter is the evolved form of Gastly, and Gengar's second evolutionary form. Like Gastly, its body is gaseous, giving it the ability to travel through walls. Haunter hates light, and so it will always hide/stay in dark places such as abandoned buildings and caves. It is a lot less playful than either Gastly or Gengar, stalking prey and sucking their life force, causing them to convulse until they are dead. Some theorise that this Pokémon is from a different dimension.

Powers and Abilities: Superhuman Physical Characteristics, Immortality (Types 3 and 7), Darkness and Shadow Manipulation, Enhanced Senses, Statistics Amplification, Statistics Reduction, Intangibility and Non-Corporeal (It is made up of a mixture of gases and souls), Possession, Curse Manipulation, Shapeshifting, Status Effect Inducement, Illusion Creation (Gastly can create illusions of fully evolved Pokémon), Reality Warping, Necromancy (A Gastly once used its fog to resurrect Pokémon zombies), Sleep Manipulation, Mind Manipulation, Soul Manipulation, Size Manipulation, Poison Manipulation, Absorption of dreams, Healing, Power Nullification, Aura (Via Dark Pulse), Offensive Illusion Creation (Via Night Shade), Duplication, Flight, and Pseudo-Teleportation, Regeneration (Mid-High; Gastly is composed of gas and has no real shape, so it can reform itself), Death Manipulation (Via Destiny Bond), Electricity Manipulation, Fire Manipulation, Ice Manipulation, Invisibility (Gastly is almost completely invisible), Paralysis Inducement (Its attacks cause the 'paused' status in Pokémon Ranger), Dynamax, Resistance to Poison Moves, Bug, Grass, and Fairy moves, as well as Sleep Manipulation and Mind Manipulation (Gastly can no-sell the mind control of an enhanced Drowzee that could control every other Pokémon on an island) and Immunity to being Poisoned and Earth Manipulation (within limitations) | Same as before to a greater exent, plus Life Force Absorption, Light Manipulation, Telekinesis, possibly Dimensional Travel (Said to have come from another dimension) | Same as before to a greater extent, sans Regeneration (Mid-High), plus Can absorb heat to lower temperature by 10 degrees Celsius and Regeneration (Likely Mid, can regenerate large holes in its body) | Same but higher. Dimensional Travel. The third eye growth enables Mega Gengar to freely observe beings and events across space-time boundaries and see into alternate dimensions/universes. Can immobilize an enemy's movement by making contact with its shadow | All of Gengar's abilities plus, Gigantamax, Dimensional Travel and Death Manipulation (It's mouth is rumored to lead directly to the afterlife, Steals the lives of those it catches), Sound Manipulation (Standing in front of its mouth causes one to hear the voices of their loved ones), Superior Soul Manipulation, Telekinesis, Ectoplasm Manipulation, and Fear Manipulation via Max Terror (Prevents the opponent from switching out or fleeing), Superior Darkness Manipulation and Statistics Reduction via Max Darkness (target's Sp. Def), Superior Mind Manipulation via Max Mindstorm (Changes the ground to Psychic Terrain)

Intelligence: Gengar are typically highly mischievous creatures, spending the majority of their time frightening humans through inhabiting their shadows and highly prone to bouts of laughter. However, there is also an extremely malevolent and predatory element to wild specimens: they often possess and wait inside shadows to drain away an organism's life force or to cast potentially fatal curses on unsuspecting prey. Captive/tamed Gengar generally lack the latter behavioral patterns. The species is easily intelligent enough to understand basic human commands, and are naturally hardwired for battle. A notable Gastly has been shown having intelligence matching or surpassing humans, being able to talk to and trick other people.

Weaknesses: Weak against Ghost, Psychic and Dark type attacks | Gengar can only access their Mega Evolutionary stage through physical possession of a specific Mega Stone type that is uniquely attuned to that species and resonating the Stone with an accompanying Mega Ring (or similar device containing a Key Stone), which can only be constructed by artificial means: this excludes most wild specimens from harnessing the innate evolutionary potential, leaving only individuals in captivity as probable candidates for Mega Evolution. Mega Evolution is not a permanent transformation; specimens immediately revert back to their "base" forms once combat has been successfully concluded | Gigantamax can only be used in areas with Dynamax energy (i.e. dens and stadiums), Destroying the forcefield damages the pokemon

Note: Only techniques that Gengar can naturally learn will be listed in this profile. No TMs, HMs or Tutor Moves.