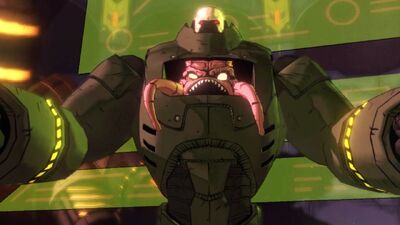 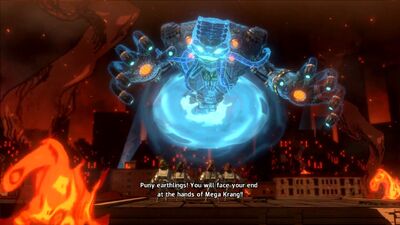 Krang (along with Shredder and Lord Dregg), is one of the main antagonist in the 1987 Teenage Mutant Ninja Turtles series. He is an alien warlord from Dimension X who seeks to both conquer Earth and his home Dimension. He is also the partner of Shredder, whom he often argues and fights with.

Attack Potency: Wall level (Fought Leonardo and his brothers) | City Block level (Created a portal at this size) | Large Country level, possibly Planet level (Stated that if he could get through the portal, the entire country and maybe even the world was done for)

Speed: Massively Hypersonic+ (Kept up with Leonardo and his brothers) | Unknown | Unknown

Stamina: Infinite due to his robot armor

Retrieved from "https://vsbattles.fandom.com/wiki/General_Krang_(Mutants_In_Manhattan)?oldid=6042258"
Community content is available under CC-BY-SA unless otherwise noted.