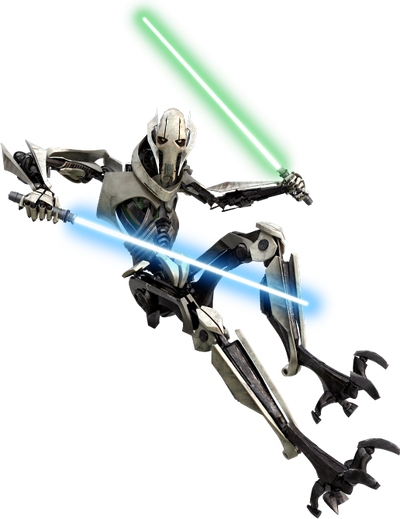 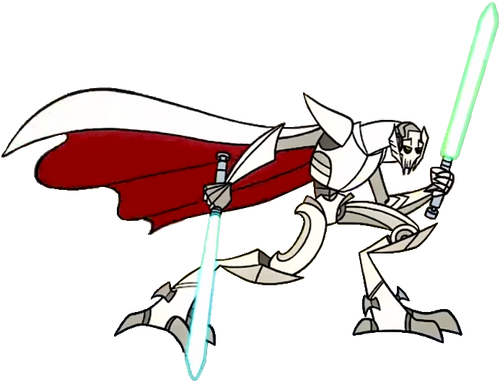 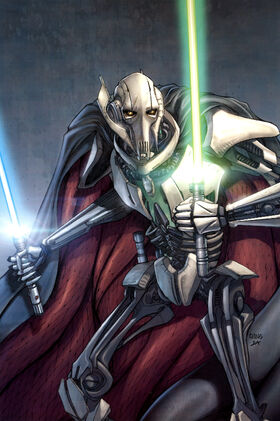 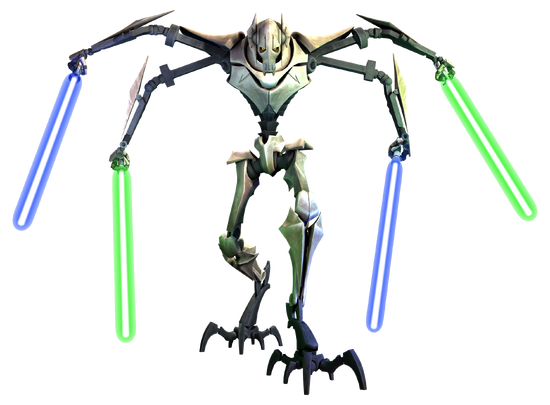 General Grievous was the Supreme Commander of the Armies of the Confederacy of Independent Systems during the Clone Wars against the Galactic Republic. A Kaleesh warlord from the planet Kalee, he chose to have his body modified with numerous cybernetics to improve his physicality, eventually leaving his eyes, brain, lungs and a few other organs as the only remaining biological parts of his body, all in exchange of great power. Trained by Count Dooku in all lightsaber combat forms, Grievous was an incredibly dangerous foe to even the greatest of Jedi.

Qymaen jai Sheelal was an honorable and tragic Kaleesh warlord who would service the InterGalactic Banking Clan to help his people from the mistreatments of the Republic. Upon leaving the Banking Clan, Count Dooku & allies would decide to manipulate the Kaleesh into keep serving them forever; They blew up a ship he was using, nearly killing him, then they saved him and turned him into a cyborg, making him believe that the Jedi were responsable for his accident. Dooku would ultimaly corrupt and tamper his mind to eclipse his nobility with cold vengence and unparalleled rage.

Now more machine than alive, and secretly humiliated at being rebuilt into a cyborg, General Grievous became the proud Supreme Commander of the Armies of the Confederacy of Independent Systems. He wreak havoc on the Republic during the Clone Wars as a brilliant strategic leader and one of the most skilled lightsaber duelists in the galaxy. Grievous would train with Dooku in the Jedi arts and ways of the Sith, surpassing any of the Count's previous students in mere weeks. Grievous hunted down and killed hundreds of Jedi, contending with them even when outnumbered and coming up on top through sheer power and skill, he would make use of theatricality and intimidation, if possible setting up ominous scenarios before facing his opponents. The General would constantly mix all forms of lightsaber combat during his duels with occasional unorthodox attacks and masterful acrobatics, his aggressive fighting style would eventually be countered by Obi-Wan Kenobi, the best defensive duelist of the Jedi, ultimately resulting in Grievous' death.

Powers and Abilities: Superhuman Physical Characteristics, Self-Sustenance (Type 1), Master Lightsaber Duelist, also skilled with blasters and electrostaffs, Skilled Unarmed Combatant, Competent Military Strategist and Tactician, Cyborgization, Body Control (Can divide each of his arms into two. Can completely rotate his hands, being able to use his lightsabers like helicopter propellers at higher speeds than how he normally attacks), Acrobatics (Can leap great distances, and climb & mobilize on walls and ceilings) | As before, Better Body Control (As before. Each of his 4 arms is as strong as his individual 2 arms united. Can utilize his lightsabers with his legs, being able to grab & use them like that in the middle of combat, fight with his legs alone as well as being able to combine that with his arms, can also grab his opponents with his legs. Can spin his torso, using his arms & lightsabers like a helicopter propellers), Better Acrobatics (Can jump several meters in battle, making flips and/or dodging attacks. Can casually walk and stay on walls and ceilings, running on the former to chase targets or dodge attacks), Stealth Mastery (Can disappear from Force sensitives while being near them), Electricity Manipulation (Has electric cables in one of his arms), Skill Mimicry in all forms of Lightsaber Combat (Copied Mace Windu‘s Vaapad to a limited degree, with Windu being worried that he would be able to fully learn the style if he did not immediately end the fight, despite the fact that Vaapad requires heavy use of The Force), Information Analysis & Analytical Prediction (Due to the combat algorithms in his brain, Grievious can predict attacks and analyze a foe’s style and movements to calculate the best course of action)

Speed: Subsonic running speeds (Can keep up with Jedi Masters such as Obi-Wan Kenobi and the likes of Asajj Ventress), Massively Hypersonic+ combat speeds & reflexes (Can keep up with the likes of Obi-Wan Kenobi and Asajj Ventress in a duel. Has reacted to and batted away blaster fire from Clones of the 501st Legion and 212th Attack Battalion. Has also casually dodged blaster fire from members of Maul's Shadow Collective multiple times) | Relativistic in short bursts (Can move as fast as Jedi Masters in short bursts, has moved at such speeds that it appeared as though he was teleporting) with FTL combat & reaction speed (Can keep pace with Obi-Wan Kenobi, regularly sparred with Dooku, briefly faced off against Mace Windu. Far above the IG-100 MagnaGuards, whose processors grant them reflexes just under the speed of light, regularly spars with and overpowers MagnaGuards in training sessions)

Durability: Large Town level (His cybernetic chassis should be about as durable as that of Karbin, whose cybernetics were based on that of Grievous's own and made from similar materials) | Planet level (Took the telekinetic attacks of both Shaak Ti and Roron Corobb, and was left unscathed. Uncutted after being attacked by Asajj Ventress with her lightsabers)

Stamina: High (Observed the same place for several hours, seemingly without moving) | Very high (Was fine after the Battle of Hypori and in his mission to kidnap Palpatine, when he had to battle many Jedi at once of whom the survivors ended up tired)

Standard Equipment: Various lightsabers (at least 4), a blaster, various cybernetics, shotable grappling hooks in both of his arms | As before, Repulsorlifts in his limbs

Intelligence: Having been personally trained by Count Dooku, one of the greatest lightsaber duelists ever produced by the Jedi Order, Grievous is a master of multiple forms of lightsaber combat and could overwhelm multiple Jedi at once. Feared as a Jedi hunter, his collection of dozens of lightsabers proved his effectiveness in combat, easily adapting to various Jedi tactics before going in for the kill. He is also a skilled pilot and marksman, often clashing with Republic forces in his own starfighter and with blaster weaponry when necessary. He is also pragmatic, resorting to any means of victory in combat, including involving innocents in the crossfire as well as using his Magnaguards to attack his opponents from behind as he continued to press on them from the front. However, he is quite arrogant and self-assured, and sometimes underestimates his targets once he has the upper hand and will fail to counter for outside factors, such as Hondo Ohnaka using a starfighter to intervene in Grevious' battle with Ahsoka Tano. | In the Legends continuity, Grievous is a military genius and a brilliant strategist who can hide his elaborate strategies with seemingly chaotic formations and maneuvers designed to create misconceptions and thus exploitable errors on the part of his opponents. Developing his own, personalized lightsaber combat style, he could overwhelm multiple members of the Jedi Council at once with his relentless, lightning-fast assault, even matching the Vaapad style developed by Mace Windu, who was arguably the Jedi's greatest warrior at the time. However, Dooku has criticized Grievous' lightsaber technique as lacking finesse and being overly reckless at times, which ultimately led to Grievous' final defeat when the defensively oriented Obi-Wan Kenobi frustrated Grievous to the point of creating an opening that Kenobi exploited to sever Grievous' limbs and later his chest cavity.

Weaknesses: His vital organs have not undergone modification, rendering them exceedingly vulnerable to any form of attack if his chest cavity is pried open, He is somewhat arrogant and will often fail to accommodate for factors outside of his control when he has the upper hand. Due to a combination of factors, including natural breathing issues, cyborgization, and damage inflicted to his lungs, has left him with a serious cough and severe breathing deficiencies.

Grievous in Star Wars: Age of Republic
Add a photo to this gallery