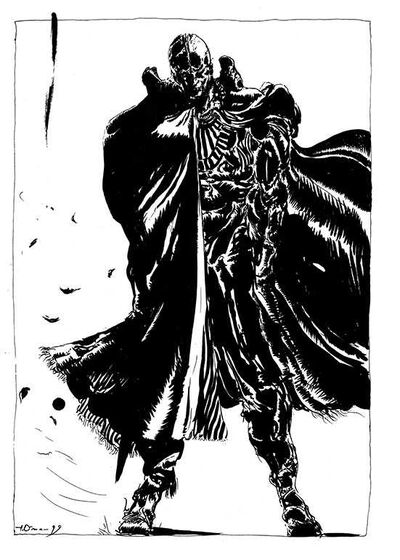 General Gaskell is a Greater Noble who conquered and ruled over the largest domain in the southern frontier. He is known to be brilliant in battle and has had some of the most legendary triumphs in Noble history. When the OSB arrived he battled them to a standstill and sent them packing. Another legendary battle he is known for is the "G Revolt". His prowess in these areas with standing he is also feared and detested for his cruelty, his subjects were tortured on a whim without cause in most cases testing the powers gained from scrolls on them. Using technology he preserved all the bodies he killed and tortured piling them into a pyramid said to have reached tens of thousands of feet high.

Classification: Vampire, Greater Noble, One of the Six Demon Generals

Powers and Abilities: Noble Physiology, Spatial Manipulation, Existence Erasure (Can erase anyone from existence directly or even remotely. Could erase thousands of Noble armies at a time despite the fact that Nobles can regenerate from complete physical erasure. Was also stated to erase space), Summoning (Can summon Meteors from outer space to hit his targets with pinpoint accuracy), Necromancy (Can revive dead people and turn them into weapons), Earth Manipulation and Water Manipulation (Was stated to cause Earthquakes and Floods on a whim), Darkness Manipulation (Can emit Darkness Aura), Weather Manipulation and Electricity Manipulation (Can control the weather and was shown to cause rainfall accompanied by over 30 thunder-strikes at a mere gesture with his hand), Sound Manipulation (Can talk like a Disembodied voice to others even if his real body is somewhere else), Clairvoyance (Was able to keep track of D and the Transporters, as well as that of the Assassins, despite all of them were outside of Gaskell's territory, Resistance to Fear Manipulation, Paralysis Inducement, and Empathic Manipulation (Can resist the effects of D's Aura)

Attack Potency: At least Universe level, possibly High Universe level (Was stated to be a Noble so powerful that he is considered 2nd only to Sacred Ancestor and that he was responsible for Single-Handedly fighting the entire Nobility for 50 years. Was somewhat able to match Novel 12 D and Lord Rocambole in combat and is superior to every Invitee sans Lord Rocambole and Rosario)

Stamina: At least Very High (Should at least scale to regular Nobles)

Range: Extended melee range, tens of meters with some powers

Intelligence: Supergenius (Nobles are by nature extremely intelligent, not only in their ability to manipulate or execute military tactics, but also their highly advanced technology. The nobility have invented technology such as an android who can hold a pocket reality full of stars, machines that can cure previously impossible to cure diseases, machines that can turn their physical forms into gases or illusions, ships capable of Massively FTL+ travel, machines that can cover the universe in darkness over time, coffins with infinite sized dimensions and many traps, Mobius Books and the Blood Fountain, as well as much more. The nobility were also capable of predicting fate with 100% accuracy through purely mathematics.

Weaknesses: Nobles are weak to holy symbols, garlic, sunlight, and running water. They can also be killed by piercing of the heart.

Retrieved from "https://vsbattles.fandom.com/wiki/General_Gaskell?oldid=5960694"
Community content is available under CC-BY-SA unless otherwise noted.