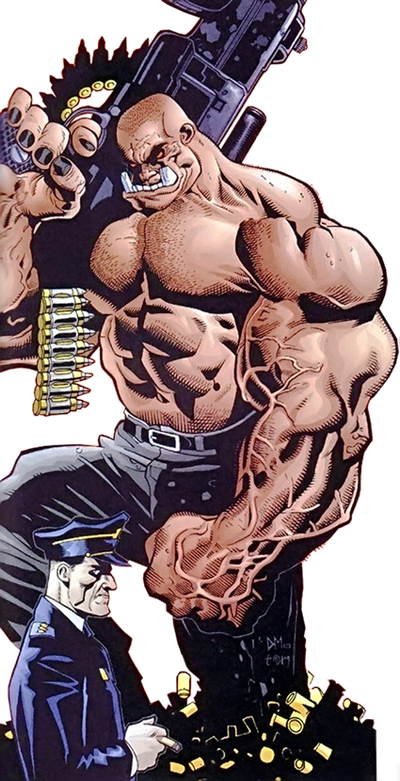 General Wade Eiling is a corrupt military tactician responsible for the experiments that created Captain Atom and Major Force. After being diagnosed with brain cancer, he schemed to obtain the body of the Shaggy Man for his own, successfully transferring his brain patterns into the beast to become a nigh-unstoppable juggernaut.

Classification: Android with the transferred mind of a human US Army general

Intelligence: A a seasoned member of the U.S. Army, Eiling was trained in a variety of hand-to-hand combat techniques, which allowed him to match the likes of Superman and Wonder Woman when combined with the overwhelming brute strength of the Shaggy Man's body. He has also spent many years as a general and tactician, successfully outmaneuvering the Justice League to obtain the Shaggy Man's body and manipulating the Ultramarines into serving his ends. However, after transferring his brain patterns into the Shaggy Man, Eiling's intellect became dulled, allowing the Justice League to lure him onto a rocket platform in order to strand him in the asteroid belt.