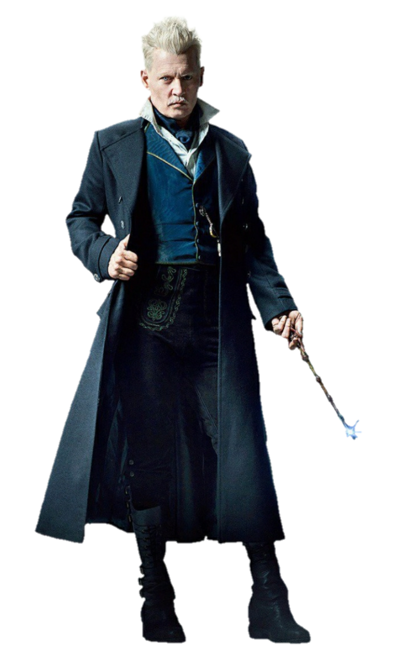 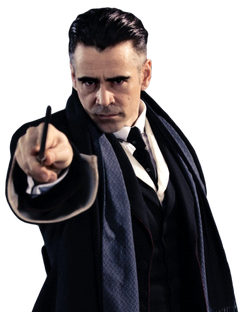 Gellert Grindelwald (c. 1883 – March, 1998) was considered one of the most dangerous Dark Wizards of all time. A student at Durmstrang Institute, Grindelwald was expelled for conducting twisted, dark experiments. He later fostered a friendship with a young Albus Dumbledore, making plans to find the Deathly Hallows and lead a Wizarding revolution to end the International Statute of Secrecy, creating a benevolent global hierarchical order led by wise and powerful witches and wizards that dominated Muggles. Their partnership fell apart after the two were involved in a three-way duel with Aberforth Dumbledore that resulted in the death of Ariana Dumbledore. Grindelwald left Britain and later stole the Elder Wand from Mykew Gregorovitch, proceeding alone with the revolution he and Dumbledore had planned.

Grindelwald was a complex figure, highly idealistic and talented, dedicated to achieve his ends at any cost. A revolutionary operating outside the law, he and his followers committed numerous crimes, including several known murders. With violent acts in both the United States and Europe, he ultimately established a power base in continental Europe at the fortress Nurmengard. In 1945, at the height of his power, Dumbledore confronted and defeated him in a legendary duel. He was subsequently imprisoned in his own fortress for decades, and was slain there by Voldemort in 1998 when he refused to give up information on the location of the Elder Wand.

Origin: Harry Potter (Fantastic Beasts and Where to Find Them)

Powers and Abilities: Superhuman Physical Characteristics, Magic, Genius Intelligence, Social Influencing (Can sway entire crowds to join his side. MACUSA was forced to cut out his tongue after he convinced 3 different prison guards to try and help him escape), Telekinesis, Precognition (Made an illusion of notable events from World War II to his followers out of smoke), Electricity Manipulation (Can summon lightning bolts), Fire Manipulation and Regeneration Negation with Fiendfyre, Can cause Shockwaves, Invisibility, Teleportation, Death Manipulation via the Killing Curse, Pain Manipulation via the Cruciatus Curse, Mind Control via the Imperius Curse, Potioncraft, Shapeshifting (Made himself appear as one of his followers), Healing, Forcefield Creation via Shield Charms, Resistance to Mind Reading and Mental Attacks via Occlumency, Water Manipulation, Transmutation

Attack Potency: Wall level physically. Large Building level with magic (Was said by many to be the second most powerful Dark Wizard ever, and hence shouldn't be overwhelmingly weaker than Voldemort. Fought the Dumbledore brothers in a three-way duel) | Wall level physically. At least Large Building level with magic (Likely superior to old Dumbledore. Created a fire that was eventually going to burn down Paris and summoned multiple lightning bolts), Small Town level+ with more powerful spells (Fought Dumbledore in his prime and was on par with him). Several of his spells can ignore conventional durability

Range: Several dozen meters with most spells. At least citywide with Teleportation and possibly with Fire Manipulation

Intelligence: Genius. A natural leader with near unmatched charisma, his skills, mastery, and understanding of magic were considered to be on par with those of Albus Dumbledore. Grindelwald became an exceptional strategist and tactician as an adult, whose expertise was perhaps best shown by his ability to start a massive revolution on his own, gathering a large number of followers to establish a new wizarding world order and strategically overwhelming much of the Wizarding world to the point that Dumbledore's tactical advice ultimately proved fruitless, requiring Dumbledore's direct intervention to finally put an end to his For the Greater Good revolution. Grindelwald also proved to be a consummate actor, multitasker and investigator, as during his time disguised as Graves, Grindelwald was able to perfectly mimic his personality and American accent, and limit his magical abilities to be only on par with Graves, as well as convincingly and effectively carry out Graves' many duties, while also gradually managing to locate the rampaging Obscurial, all without arousing suspicion. A charismatic leader that could convince crowds of followers to join him, even manipulating a trained group of Aurors to create a martyr out of a member of his army. Managed to manipulate Credence and Queenie Goldstein into joining him

Key: Pre-Prime | With the Elder Wand