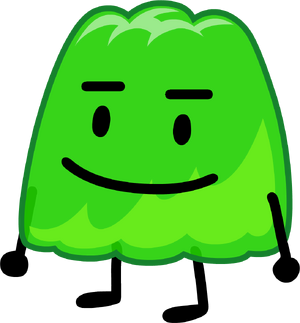 Gelatin is a contestant of Battle for Dream Island Again and Battle for BFDI, he is reckless and childish at times, although he is caring towards others at times.

Age: Claimed to be 6

Powers and Abilities: Superhuman Physical Characteristics, Toon Force, Hammerspace, Breaking the Fourth Wall (Was able to change the shape of the screen alongside with the rest of the contestants), Inorganic Physiology (Type 1), Self-Sustenance (Type 1) (Was capable of breathing while being near the top of the summit of Yoyle Mountain, which is in space), Ice Manipulation (via Freeze Juice which instantly freezes those that are injected with it, it even works on living fire), Acid Manipulation (Via Acid Spitballs), Purification (Type 1) and limited Resurrection (via Anti-Poison, which was capable of reviving and curing those who died due to poison), Resistance to Poison Manipulation (Is immune to bug poison), Extreme Cold and Cosmic Radiations (Unaffected by the extreme conditions of space)

Attack Potency: Large Town level+, possibly City level+ (Comparable to Needle), possibly higher with Acid Spitballs (Claimed that they were able to disintegrate Leafy into ash in one hit)

Speed: Massively Hypersonic+ (Dodged Leafy’s knives, which were thrown faster than Puffball could move) with Sub-Relativistic attack speed via powerscaling (Comparable to Coiny, who could throw a stick 2,760 miles in a second)

Durability: Large Town level+, possibly City level+ (Should be able to tank blows from those comparable to him)

Intelligence: Average. likely higher (Despite his reckless and childish behavior, he is capable of coming up with ideas like refilling Barf Bag using nearby spring water and seemingly owning his own restaurant)

Weaknesses: Is claustrophobic, can be a little reckless and immature at times

Thanos (Marvel Cinematic Universe) Thanos’ Profile (Speed was equalized, both were 7-B, Thanos had his Double-Bladed Helicopter Sword, and Gelatin had 20 freeze juice syringes, 10 forks, and his acid spitballs)

Eustace Bagge (Courage the Cowardly Dog (Verse)) Eustace’s Profile (Speed was equalized, both were 7-B, Eustace had his shotgun, baseball bat, mallet, and axe, and Gelatin had 20 forks, 5 freeze juice syringes, his acid spitballs, and hammer)

Start a Discussion Discussions about Gelatin (Battle for Dream Island)