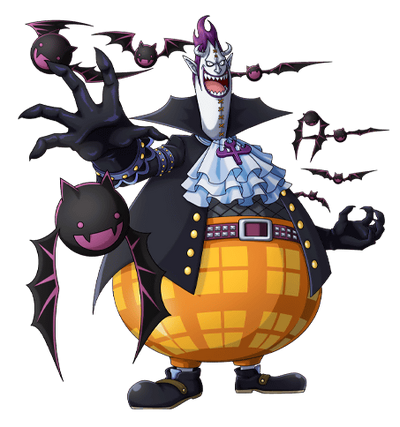 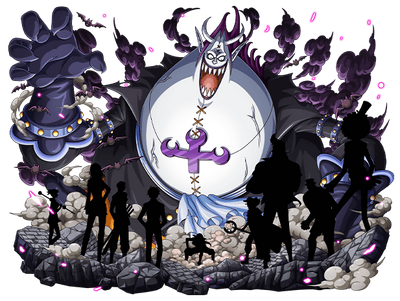 Gecko Moria is a villain from One Piece and was a member of the Shichibukai who resided on the largest ship in the world, Thriller Bark. His powers can manipulate shadows. His former bounty is 320,000,000 Beli. He is also the main antagonist of the Thriller Bark Arc who stole Brook's and various other beings' shadows with the use of the Kage Kage no Mi. He took part in the Battle of Marineford and sided with the Marines, along with most of the other Shichibukai. Upon the war's end, he was stripped of his title and was to be eliminated by Donquixote Doflamingo, but managed to escape before he was killed, leaving Moria's overall status unknown.

Powers and Abilities: Superhuman Physical Characteristics, Basic Swordsmanship, Darkness Manipulation (Ate the Kage Kage no Mi, a Paramecia type Devil Fruit which allows him to steal the shadows of other people, causing them to go into a coma for 2 days), Animated Shadow (His own shadow [Doppelman] can fight for him as a solid being that can fly, becomes impermeable, possess others shadows, shapeshift and regenerate [Low-High via physiology; can disperse into a flock of bats and come back together to heal. Can become semi-solid to liquid]), Existence Erasure (If other people are caught in the sunlight without their shadow, their bodies are erased), Necromancy (He can put the stolen shadows into corpses to create zombie soldiers who possess the same abilities as the original bearers), Limited Teleportation (He can instantly switch places with Doppelman), Power Bestowal (Can put shadows of people on other people's bodies to make them stronger and give them the same abilities as the original shadow bearer), Non-Physical Interaction (Can make contact with shadows, like they were physical beings), Weapon Creation (Can manipulate his own shadow to create weapons), Body Puppetry (Via Shadow Revolution), Limited Memory Manipulation and Mind Manipulation (No matter how strong the shadow is, once ripped away from its owner, it will eventually forget its memories of its original owner and obey the Moria completely), Absorption (He can absorb all of the shadows in a large area into him), Transformation and Size Manipulation (Capable of growing to giant size and and gain a massive strength boost), Body Control (Can change the form of one's shadow, making their body take the form of their shadow), Large Size (Type 0 to 1 by absorbing shadows), Immense Willpower (Absorbed 1000 shadows without passing out, though this could be because of the Kage Kage no mi)

Attack Potency: Large Town level with Doppelman (Could damage Luffy with his attacks. Harmed Sanji and Nico Robin using Brick Bats. Pierced straight through Little Oars Jr.'s chest and incapacitated him, though Oars Jr. was already seriously injured by Kuma and Doflamingo. Fought Curiel, one of the division commanders in the Whitebeard Pirates, while sustaining no injuries) | Small City level (Launches a punch that cracks Thriller Bark, splitting the entire island-ship)

Durability: Large Town level (Tanks a direct hit to the face from Nightmare Luffy's Pistol. Is then briefly incap'd by a Storm attack from Nightmare Luffy, but rises up minutes later. Was mostly annoyed at having his ass kicked by Base Luffy. Was unaffected by Nami's Thunderbolt)) | Small City level (Comparable to his Attacking Power. Took attacks from Gear 2nd and 3rd Luffy)

Range: Extended human melee range due to size, at least a kilometer with Doppelman

Standard Equipment: A pair of scissors to cut people's shadows from their bodies

Weaknesses: Standard Devil Fruit users weaknesses. Overconfident and lazy, Shadow Asgard form is temporary and can lose power if hit by even a weaker opponent, zombies still have the personality of the person their shadow was taken from and take a while to come under his control if they have a lot of power, no special powers such as Devil Fruit abilities are transferred to the zombie with the shadow, only the original owner's personality (which subsides after a while), physical stats, and skills, if the original owner dies the zombie with his/her shadow will die too, zombies can have their shadows ejected from them and returned to their original owner if they eat salt (an amount proportional to their body size), shadows will return to their owner if the zombie body they are in is completely destroyed, shadows stolen by Moria that have been ejected from a zombie can be used by anyone inside of their body and give them a power boost, but it only lasts for 10 minutes at most, but only people with strong spirits can survive having more than a few shadows in them at once. Can be reckless at times.

Kage Kage no Mi (Shadow Shadow Fruit): A Paramecia type Devil Fruit, this fruit allows the user to manifest and control shadows as a tangible physical form. With this power, the user is able to grab hold of their victim's shadow. They are then able to cut it with a pair of scissors as if it were a cloth. With the shadow, they are then able to place it into a lifeless corpse in order to create a zombie minion. The minion that is created retains the mannerisms and abilities of the victim. The minion, however, is only as strong as the body it is composed of. As for the original owner of the shadow, they will enter a two day coma once their shadow is separated from them. The Devil Fruit user can use this effect to their advantage in battle as the original owner is completely defenseless until they wake up from their coma or are woken up. The original owner of the shadow is then forced to remain in darkness as they will vaporize if hit by sunlight. Being unable to exist in light, the original owner is also unable to cast any sort of reflection and is also unable to be photographed.

Shadow Asgard: Moria summons all the shadows that belong to his zombies and absorbs them into his body, growing to giant size and morphing a bit to be like a lizard (hence his name). This gives him a massive strength boost, but it only lasts for a limited amount of time and he loses shadows when hit by a strong enough attack, and his speed is greatly decreased.