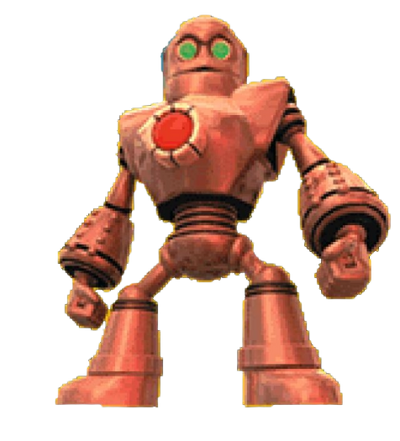 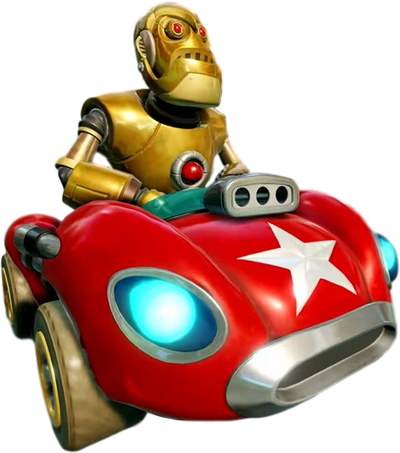 Geary is a minor character in the Crash Bandicoot series. He is an alien robot from the technologically-advanced planet Teknee whom debuted as one of the main bosses in Crash Nitro Kart, serving as Emperor Velo's finest racer and his planet's champion, and later re-appeared as a playable racer in Crash Team Racing Nitro-Fueled.

Geary stands out from the other three/four champions in Crash Nitro Kart due to not only the fact that he is the best out of them, but also his constant shift in personality, as whenever he appears, he is shown alternating from serious, determined and somewhat destructive - the latter being indicated by his eyes turning red, rather than remaining green - to being more distracted by his obsession with cleanliness.

Attack Potency: At least City level (Can harm the members of Team Bandicoot and Team Cortex, which includes the likes of Crash Bandicoot and Dr. Neo Cortex, using various weapons such as Red-Eye Missiles and Bowling Bombs)

Speed: Supersonic+ with Massively Hypersonic+ or higher reaction speed (Can drive vehicles that can keep up with Team Bandicoot or Team Cortex's karts, which are fast enough to outrace Oxide's hovercraft. Was stated by Emperor Velo to be his finest racer, presumably making him superior to the rest of the champions: Krunk, Nash and Small/Big Norm)

Standard Equipment: Cleaning supplies (such as a vacuum cleaner and a brush, which are stored inside his body), two minions, etc.

Intelligence: Was stated to be "the pinnacle of robotics", though not only is this a bit of a vague statement, but there isn't really anyone to compare him to either. Despite that, Geary has been portrayed as a highly skilled racer, being the champion of planet Teknee and Emperor Velo's finest racer.

Weaknesses: Is obsessive with cleaning, which along with his multiple personalities can often distract him, albeit this hasn't been shown to hinder his performance in races.

Retrieved from "https://vsbattles.fandom.com/wiki/Geary_(Crash_Bandicoot)?oldid=5809543"
Community content is available under CC-BY-SA unless otherwise noted.