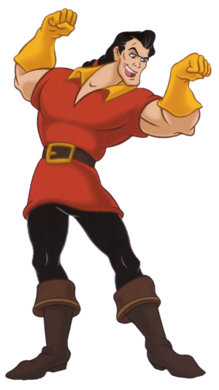 Gaston is the main antagonist of Disney's 1991 animated feature film Beauty and the Beast. A handsome and narcissistic hunter, he constantly seeks Belle's hand in marriage, seeing as she's considered the most beautiful girl in the town, and performs many underhanded tactics to ensure this happens. But when Belle falls in love with The Beast, Gaston convinces the townsfolk to form an angry mob and kill the Beast by storming his castle, taking Belle for himself.

Attack Potency: Wall level (Destroyed a wall. Fought with the Beast. Broke a small statue by hitting it with a bar)

Speed: Peak Human (Can casually evade attacks from 3 people at once in very close corners)

Lifting Strength: Superhuman (Easily heaved a bench up with one arm while 3 grown women were sitting on it. Also snapped a leather belt wrapped around his throat by flexing his neck)

Durability: Wall level (Survived being beaten around by the Beast. Can withstand the counter-force of this.)

Intelligence: Is skilled at manipulating people, but notably lacks book smarts. (Refused to read a novel because it lacked pictures and threw a fit when someone beat him at chess)