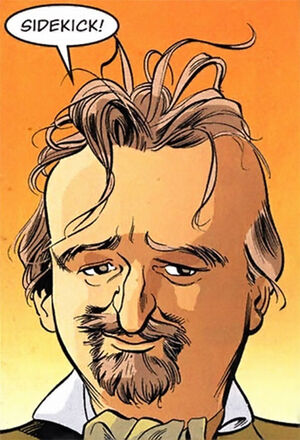 Gary, the Pathetic Fallacy is the anthropomorphic personification of all anthropomorphic personifications in the Fables mythos. He is one of the beings known as Literals who are embodiment of storytelling, and is considered to be one of the oldest of them all. As a Literal, Gary is immortal and has the unique ability to breathe life into otherwise inanimate objects (his name "Pathetic Fallacy" means in the English dictionary as the "attribution of human feelings and responses to inanimate things or animals, especially in art and literature"). This includes simple tasks such as asking small utensils to dance and sing, to more complicated once like inventing a universe. He is the self-proclaimed sidekick of the fable Jack Horner.

Age: Since the beginning of existence.

Attack Potency: Universe level+ (Together with Jack Horner's design , he invented a new universe complete with its own physical laws and fate)

Speed: Athletic Human (Dodged an incoming axe attack from behind)

Lifting Strength: Unknown (He can create beings that can do the lifting for him)

Striking Strength: Unknown (He can create giant beings that can do the striking for him)

Durability: Human level (He can still be harmed by conventional and magical weapons)

Intelligence: Not very bright and tends to be an obedient "sidekick" who follows Jack Horner around. His mind is also further warped due to Mr. Revise' powers. But there will be times where his intellect and vast knowledge would return to him (mostly for the purpose of exposition).

Weaknesses: He can still be killed by conventional and magical means, but as a Literal he will get resurrected overtime.

Note: Despite being published by Vertigo comics, Fables is not canonically part of the wider DC universe.

Retrieved from "https://vsbattles.fandom.com/wiki/Gary,_The_Pathetic_Fallacy?oldid=5687681"
Community content is available under CC-BY-SA unless otherwise noted.