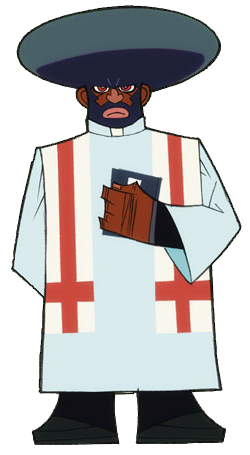 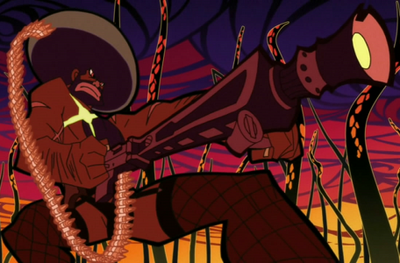 Garterbelt, or "Garter" for short, is a main character in Panty & Stocking with Garterbelt. He is a large black man with a titanic afro. Garterbelt is the reverend of Daten City and the mentor of the Anarchy sisters, Panty and Stocking. Garterbelt has a very checkered past. In "Once Upon a Time in Garterbelt", it is revealed that Garterbelt used to be a gangster, who performed various imaginable crimes. He eventually became the greatest crime lord in his town but was gunned down in his own office. Soon after, he ended up in heaven, where he was given an as-of-yet undisclosed mission by Judgement. When he refused to take it, he was cursed with immortality and sent to the beginning of time, forced to live through the creation of the world as it is today, going through biblical events such as Adam and Eve, Noah's ark, etc. And other events Including various wars, being part of many different cultures, and more. He retains his immortality in order to continue supervising Panty and Stocking, exploding in a manner similar to ghosts whenever he is killed, only to reassemble himself moments later.

Age: As old as time

Powers and Abilities: Superhuman Physical Characteristics, Immortality (Types 1, 3, 4, and 8 [Cannot be killed so long as Panty and Stocking are in the mortal realm and God wills him to stay alive]), Regeneration (High-Mid), Weapon Mastery (Expert Marksman), Can pull infinite ammunition from his afro, Skilled in hand-to-hand combat, Toon Force (Low level)

Speed: Unknown. At least Massively Hypersonic+ (Should be comparable to if not faster than Panty and Stocking's Angel Form)

Durability: At least Large Planet level (Tanked a meteor that wiped the surface of the planet in his base form just after becoming an emissary for God, Took hits from Corset wielding the Daemon Sisters as weapons), Immortality makes him very hard to kill

Range: Hundreds of meters with guns

Intelligence: Very High (Garter has lived since the beginning of time and has accumulated both knowledge and wisdom over the millennia)

Weaknesses: Attractive young boys; may or may not die permanently if Panty and Stocking's mission is completed