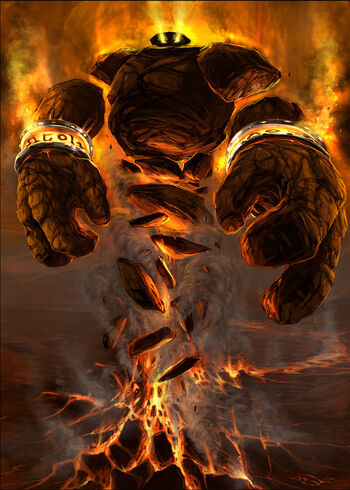 Garr is a conglomerate lava elemental within Ragnaros’s forces. He can be encountered within the Molten Core where he guards the Rune of Blaz. He is among the three figures that participated in the legendary betrayal against Windseeker Thunderaan, which had sparked the great war between the Elemental Lords.

Attack Potency: At least City level (One of the three figures responsible and the main enactor of the ambushing and eventual defeat of Prince Thunderaan, who is likely stronger than the Conclave of Wind due to being their superior and also due to having been promoted as the new replacement Elemental Lord for Al'Akir. Comparable in power to Baron Geddon as a fellow lieutenant during the War of Three Hammers).

Speed: Unknown (Can contest against Thunderaan who claims to be "everywhere")

Range: Tens of meters. Possesses a maximum range of 45 yards.

Antimagic Pulse: An omnidirectional blast that dispels any form of magic within the vicinity.

Magma Shackles: An ability that presumably binds nearby individuals in a pair of shackles made of magma, reducing their movement speed. 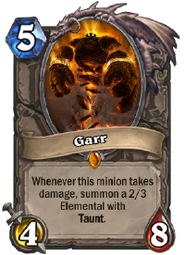 Garr in Hearthstone
Add a photo to this gallery

Retrieved from "https://vsbattles.fandom.com/wiki/Garr?oldid=5579800"
Community content is available under CC-BY-SA unless otherwise noted.