VS Battles Wiki
Register
Don't have an account?
Sign In
Advertisement
in: Tier 7, Tier Low 7-B, Tier 7-B,
and 42 more 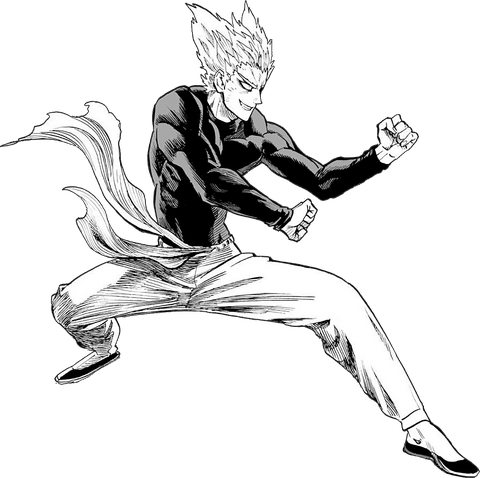 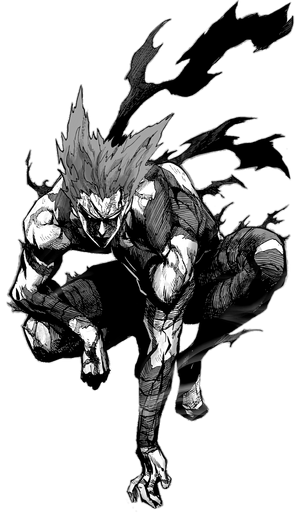 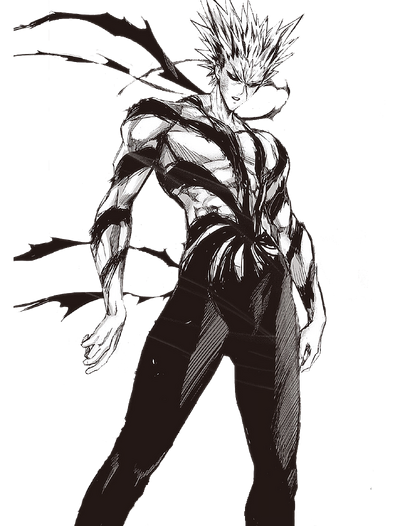 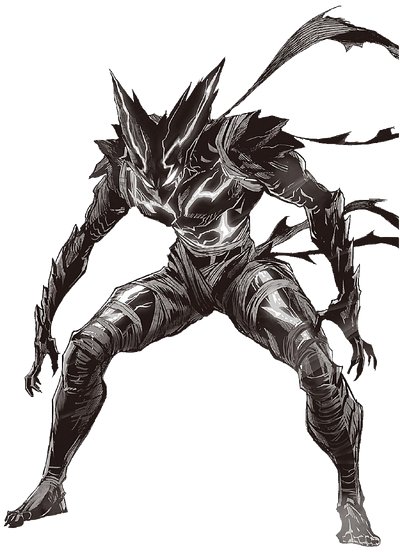 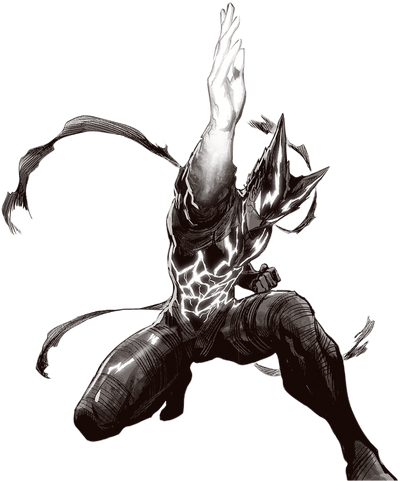 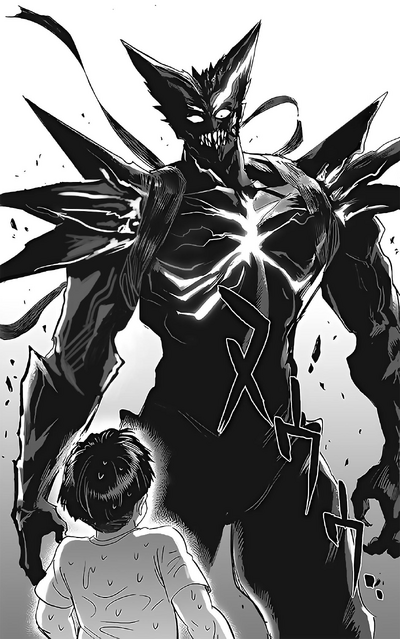 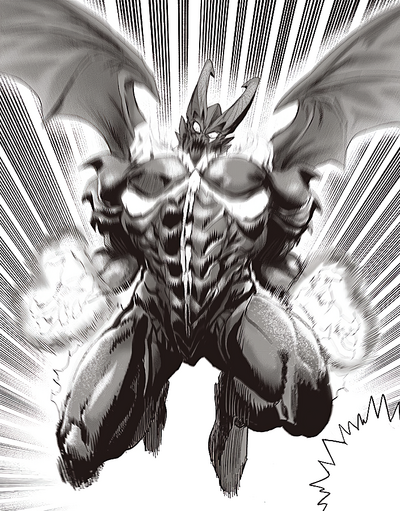 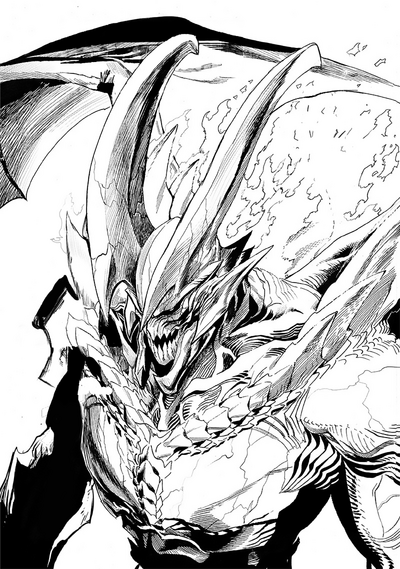 Garou (ガロウ, Garō) is a former disciple of Bang and was considered a prodigy. But one day, he was kicked out from his dojo for going on a rampage once he got bored with everyone. He's one of the strongest characters in the series and plays a major role as the main villain in the Hero Hunt arc. His dream is to be the strongest monster ever and become the world's first God-Level Threat, or so he says.

Attack Potency: Small City level (Fought and defeated Tanktop Master after holding back. Despite having lost most of his strength as a result of exhaustion, blood loss, and poison, he managed to hold his own against Post-Superfight Genos and implied he would perform better against him in peak condition. Damaged a pumped Metal Bat) | At least Small City level (Easily decapitated Royal Ripper before evolving), up to At least City level (Grew much more powerful as he adapted during his fights with Overgrown Rover, Gyoro Gyoro, Orochi, and Superalloy Darkshine. At his peak, he started to break his limiter, and he was ultimately capable of overpowering Darkshine) | At least City level (Fought and defeated Bomb before growing in strength to match and ultimately defeat Awakening Breath Bang while asleep. After waking up, he one-shotted Vomited Fuhrer Ugly), up to Continent level (Fought and harmed Sage Centipede. Could damage Sage Centipede when Metal Bat couldn't, and was stated to be vastly stronger than him), Continent level+ with Resonance (Repelled the 6666 Leg Grand Drill and severely damaged Sage Centipede's exoskeleton in conjunction with Metal Bat’s Savage Hurricane. Punched through Sage Centipede and ripped out his regeneration core) | Continent level+ (Sliced Sage Centipede in half. Grew even stronger after his monsterization increased and he transformed twice), up to Moon level (After transforming once again, he slammed into the Earth, pushing the Earth's inner layers), Can ignore durability with Roaring Aura Sky Ripping Fist (A technique that produces devastating shockwaves capable of enveloping opponents and breaking their bones, even if they are as strong as Garou) and Fa Jin (Stated that these powerful attacks target the internal organs of his opponents, regardless of how tough their bones and flesh are)

Speed: Massively Hypersonic (Once serious, he pummeled Tanktop Master's body before he could even react, striking his joints and vital spots in the process. Seemingly effortlessly outmaneuvered and even blitzed a pumped-up Metal Bat. Despite being significantly tired and weakened, he kept up with Post-Superfight Genos and implied he would perform better against him in peak condition) | At least Massively Hypersonic (Faster than before), up to At least Massively Hypersonic+ with Reactive Evolution (Is much faster than before and grew even faster during his fight with Orochi. Could keep pace with and eventually outrun numerous of a restrained Orochi's horns, which previously blitzed him, but was ultimately defeated. Managed to dodge and counter one of Darkshine's hits. His speed grew at an alarming rate during his fight with Darkshine, eventually growing fast enough to overwhelm him) | At least Massively Hypersonic+ (Kept up with Bomb and Awakening Breath Bang while asleep), up to At least FTL (Grew much faster after defeating Bang and waking up, ultimately being able to surpass Flashy Flash's speed. Created a massive constellation with his sheer speed in 1.3 milliseconds alongside Platinum Sperm. Became even faster, to the point of outspeeding Platinum Sperm) | At least FTL, likely higher (Significantly faster than before, and continues to grow faster by adapting and transforming)

Durability: Small City level | At least Small City level, up to At least City level (Survived Overgrown Rover's initial attack with heavy injuries, and eventually adapted to withstand multiple blasts from him. Surpassed Darkshine after his battle against him). Regeneration makes him difficult to kill | At least City Class (Much more durable than before. Could take numerous hits from Bomb and Awakening Breath Bang), up to Continent level (Survived Sage Centipede's Centipede Grand March and his 6666 Leg Grand Drill) | Continent level+, up to Moon level (Withstood Saitama's Consecutive Normal Punches, which were stronger than his own Extreme Fa Jin)

Stamina: Superhuman (After being worn down from fighting multiple strong Heroes, curb-stomped by Watchdog Man, and knocked unconscious by Saitama, he was forced without sufficient rest into a battle against numerous A-Class heroes, where he suffered a gunshot wound to his leg and was hit with poisonous arrows to drain his stamina but still managed to defeat all of his opponents. Immediately afterward, he found himself up against Genos and then both Bang and Bomb, who subjected him to continued pummeling to the point that he was on the verge of death. Even after all the punishment mentioned above, he still willed himself to resume fighting, ignoring the huge amounts of damage that his body had taken. Later on, after he healed from his wounds, he was one-shot by Saitama and left unconscious for a while, only to fight both Bug God and Royal Ripper not long afterwards, although Garou was defeated. After recovering a few hours later, Garou made his way to the Monster association base to fight against multiple monsters such Overgrown Rover, Gyoro Gyoro, Orochi, and eventually Darkshine, all with little time for rest in between. Continued fighting even after gaining injuries like his ribs getting broken or getting impaled. Even after being buried under Z-City, fighting with his master Bang, engaging in a triple match against Flashy Flash and Platinum Sperm, and defeating the colossal monster Sage Centipede, he still has enough energy to keep moving in top condition. He could survive a pummeling from Saitama, only to come back stronger than before)

Intelligence: Genius Fighter (Garou has great knowledge in hand-to-hand combat and can analyze and memorize an opponent's fighting style and movements in only a few moments. He was also able to accurately predict the plans of both the Monster and Hero Associations by himself. Through observation, he learns of countermeasures for other people's fighting styles. Sometimes switches between fighting styles to keep his movement unpredictable or for his amusement. His martial arts mastery enables him to attack his opponents as if they were being cornered by dozens of martial artists at once as described by Darkshine, despite both being roughly on the same level at the time of their fight and Darkshine being a highly experienced hand-to-hand fighter. Stated to have reached the epitome of martial arts after mastering a plethora of fighting styles and perfecting his fist).

Weaknesses: Garou is very protective of Tareo, and he always put his life on the line to ensure his safety. He often withholds from using the Water Stream Rock Smashing Fist martial art until he needs to, as it reminds him of Bang, who he holds a grudge against, though this weakness may not apply after his fight with Tanktop Master, as he has shown to constantly use his true fighting style from then onwards. Prone to intentionally prolonging fights to become stronger, typically letting enemies get serious. Tends to underestimate opponents once they are "defeated". Due to his fighting style being designed for humans as well as the fact that Bang did not teach him how to fight non-humanoid opponents, he may have a disadvantage against such foes. | None notable

Master Martial Artist: Garou is an extremely skilled fighter, who adapts to combat and uses the advantage of the opponent's weak spots to give himself the upper advantage in fights. His learning ability allows him to learn countermeasures for other people's fighting styles while making their fighting styles his own. He shows this ability against Tanktop Master, where he attacks his weak spots and quickly turns the tables. He also shows this unique ability in his fight with Metal Bat, where he comments that Metal Bat's attacks are getting predictable and weird. While fighting his opponents, Garou gains access to their fighting styles and techniques, simply by witnessing them once. Moreover, when fighting, Garou aims for the vital points and joints to make his opponents lose the ability to fight back very quickly. Furthermore, through analyzing his opponent's line of vision, posture, muscle tension, breathing, energy, movement patterns, and center of gravity he can nearly perfectly predict his opponent's next movement. His prediction accuracy only improves as he becomes stronger.