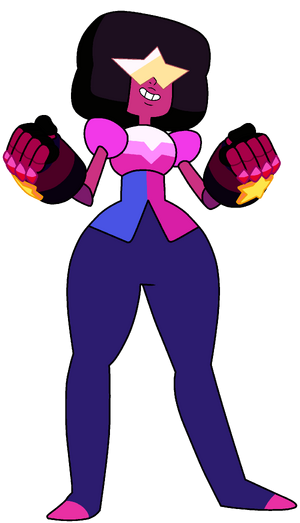 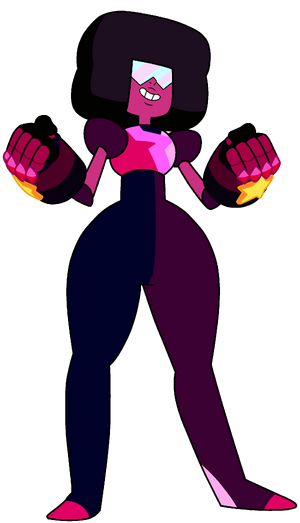 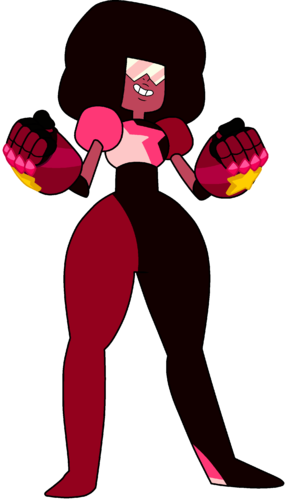 Garnet is one of the main protagonists in Steven Universe. She is the fusion of Ruby and Sapphire, and considered to be the current leader of the Crystal Gems. Garnet is one of the last surviving Gems on Earth who joined the Crystal Gems in the rebellion against Gem Homeworld, and afterward, assisted her friends in protecting the Earth over the next millennia. After Rose Quartz gave up her physical form to give birth to her son, Steven, Garnet took over as the leader of the group.

Age: Around 5750 years old as a fusion, likely older as Ruby and Sapphire

Attack Potency: At least Mountain level+ (Harmed and defeated Jasper who could survive this explosion point-blank, Capable of casually destroying Peridot's escape pod. Caused a mountainside to collapse through punching a corrupted Gem. Oneshot Peridot. Able to take on and defeat 3 battalions of Quartz Soldiers alongside Bismuth. Should be far superior to Ruby and Sapphire)

Speed: Relativistic in Combat Speed and Reactions (Faster than Pearl)

Lifting Strength: At least Class M (Hit Amethyst with enough force to turn sand into glass on contact while being gentle, Easily lifted a Gem Injector over her head with one hand, leapt hundreds of meters in the air while carrying a fishing boat, Can casually lift and carry around an axe several times larger than herself with one arm)

Durability: At least Mountain level+ (Tanked hits from Jasper, as well as a clone of herself created by Lapis. Exchanged blows with Bismuth in practice and wasn't harmed after getting thrown into a wallby Topaz. Stood close to this explosion without harm as it hit Jasper)

Standard Equipment: Gauntlets (Upgraded with spiked brasses added on to them)

Intelligence: High (Composite of Ruby and Sapphire, Garnet is very intelligent as well as a capable and strong leader, but often has difficulty solving more menial problems)

Weaknesses: Enough damage to her physical form can make her unfuse back into Ruby and Sapphire. Further damage to them will revert them back to their vulnerable gem forms which can be broken and destroyed. If her emotional state becomes unstable, she will revert to Ruby and Sapphire (which is harder than it sounds as she is the most stable gem fusion), and possesses little problem-solving skills outside of combat. Her future vision loses effectiveness if the current timeline becomes extremely improbable, or she is unaware of important factors. Garnet's Future Vision is also less effective without her visor, which helps her to refine what she sees with it.

Ampharos (Pokémon) Ampharos's Profile (Both were 7-A, Speed was Equalized, Battle took place in an open field)