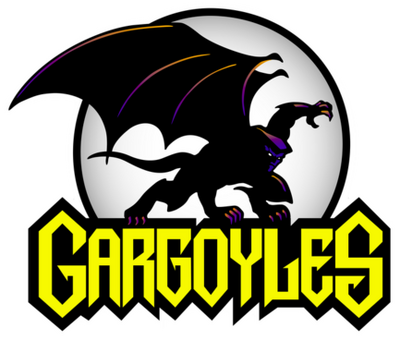 Gargoyles is a Walt Disney Company animated television series created by Greg Weisman. Two seasons of the show (totalling 65 episodes) were aired as part of the Disney Afternoon programming block between October 24th, 1994 and May 15th, 1996. (A third season, rebranded as The Goliath Chronicles and broadcast on ABC, aired from September 7th, 1996 until February 15th, 1997, but this season is not considered canonical.)

The series differed from other Disney series in its level of maturity and the darker tone of the program. It drew much inspiration from world folklore, notably the works of William Shakespeare, legends of King Arthur, and Norse mythology.

The series features a species of nocturnal creatures known as gargoyles that turn to stone during the day, focusing on a clan led by Goliath. In the year 994, the clan lives in a castle in Scotland. Most are betrayed and killed by humans and the remainder are magically cursed to sleep—i.e., be frozen in stone form—until the castle "rises above the clouds." A millennium later, in 1994, billionaire David Xanatos purchases the gargoyles' castle and has it reconstructed atop his New York skyscraper, the Eyrie Building, thus awakening Goliath and the remainder of his clan. While trying to adjust to their new world, they are aided by a sympathetic female police officer, Elisa Maza, and quickly come into conflict with the plotting Xanatos. In addition to dealing with the gargoyles' attempts to adjust to modern New York City, the series also incorporated various supernatural threats to their safety and to the world at large.

The universe of Gargoyles is inhabited by many races, most prominently the "Three Races",  gargoyles, humans, and Oberon's Children, the three known sentient species native to Earth.

The humans are relatively weak compared to the other races, physically speaking, but their technology can range from small firearms that damage walls to bio weapons that could potentially wipe out the entire human race.

The gargoyles are strong but most can only be active at night. They can tear through thick metal as if it were wet paper with their sharp claws and glide through strong currents of wind at impressive speeds, and have even greater reaction speed, with most gargoyles having showcased excellent enough reflexes to dodge bullets and lasers from up close or afar. Their stone sleep also allows them to heal from many injuries, so long as they're not too severe or too far from their stone sleep.

The Children of Oberon range in power but are all able to warp reality to some extent. Energy is energy as stated in the series, and magic is no exception. It can range from altering one's appearance or the outlook of an entire city's population to manipulating the weather or even causing worldwide extinction for all life on Earth. Keep in mind that while many of these entities are what inspired their mythological selves, they don't have the same kind of power.

The series also contains many artifacts and weapons of great power, such as the Grimorum Arcanorum, the Eye of Odin, particle beam weapons, among many others.

Thailog's Clan (Disbanded)
Add a photo to this gallery